A Review of Pirates and Mutants

Here are the two movies I saw this past weekend... did you see them?

Pirates of the Caribbean: On Stranger Tides

This film is really getting mixed reviews from people I know who have seen it--some people love it, some people didn't like it at all, and still more people are just sort of "eh" about it...

I didn't love it.  But I liked it a whole lot.  See, I'm not sure what people want out of the Pirate movies anymore... the first one was brilliant, currently residing as my 103rd favorite film of all time... it was funny, it was original, it was irreverent and unusual, and Johnny Depp had never been cooler. 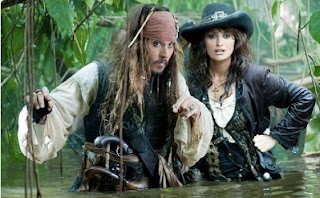 And like most people, I thought "Dead Man's Chest" and "At World's End" were convoluted, too long, complicated and tried to do way too much--in other words, not very good.  And maybe that's where people's expectations are coming from, they don't want a repeat of #2 and #3, but somehow are disappointed in "On Stranger Tides", even though it is nothing like the 2nd and 3rd films.

"On Stranger Tides" follows a basic storyline with a few subplots that are kept close to the main story.  Ponce de Leon's Fountain of Youth is the prize this time around, and everyone wants it, from Spain to England to Blackbeard the Pirate, played in earnest by Ian McShane.   So they all set out on a quest, with Blackbeard basically holding our beloved Capt. Jack Sparrow hostage, though threats aren't the only thing keeping him there... there is his long, lost love, Angelica (Penelope Cruz), who is Blackbeard's first mate--and daughter. Wait... what?

Among Blackbeard's crew is a few new random characters, including a "cleric", or a "man of God", that Angelica is keeping close to help her father's soul, and along the way, they even pick up a mermaid!  Yes, there is a bit of supernatural in this film, much like the rest, along with some voodoo and some other magic.

Geoffrey Rush's Capt. Barbossa comes back, leading the English army to find the Fountain of Youth, though he has his own motives for wanting to find it... the big ship battles we are used to in the other films are missing in this one, and the swordplay is actually not as prevalent either, though the action and escape sequences are pretty awesome.

Is it as good as the first film?  No.  Don't expect it to be, don't expect it to be anything like that.  In fact, there isn't a whole lot of this film that even connects to previous films, save for the fact its about pirates, there is Barbossa, Jack Sparrow and his first mate Gibbs shows back up... oh, and that little annoying monkey makes an appearance.

Sit back, enjoy the film, stop trying to compare it to the other three (not as good as the first, better than the second, much better than the third), and just have fun.  Please.

This film was shot in 3D, but not entirely... the special effects were done in 2D, then rendered in 3D afterwards to keep costs down, but my recommendation really is to just see it in 2D.   Mostly because I am not a huge fan of the 3D movement, and out of the dozens of movies released in 3D in the last few years, I've only seen a handful in that format, and only two--Avatar and Toy Story 3--were worth the extra dough.

Oh, real quick--to the credit of "At World's End" and "Dead Man's Chest", I have only seen them once each.  It might be unfair to categorize them as bad films when I've only seen them once, so while I don't remember leaving the theaters thinking "awesome!", I also did what you did, and compared them both to "Curse of the Black Pearl".  Perhaps they all three warrant a re-watch.

If you are a comic book fan, or a fan of the other X-Men films (I loved X-Men and X2: X-Men United, and I though X3: The Last Stand and X-Men Origins: Wolverine were decent enough), then you have to dispense of one word in order to enjoy this movie...

Throw that word out.  Open the door and chunk it into the road.  I say that because if you get caught up on that, you'll find yourself thinking "That's not how Xavier ended up in a wheelchair!  He ended up in a chair because that alien Lucifer dropped a rock on his legs!" or "Wait... how is Emma Frost an adult here, when in X-Men Origins: Wolverine, a movie that was set in the last few years, Emma is just a kid?" or "Hold on, hold on, you mean to tell me that in X3: The Last Stand, both Xavier and Erik go and see who is a young Jean Grey at her house, supposedly 20 years before the events of the movie which came out in 2006, which means its 1986, but in this scene, Xavier is still walking and BFFs with Magneto, but in X-Men: First Class takes place mostly in 1962 and tells the story of Xavier and Magneto's friendship and how they end up on opposing sides, and Xavier ends up in a wheelchair... what the heck?"

So, dispense with that.

Now that you aren't worried about that nonsense (okay, its not nonsense, because I'm a stickler for details when it comes that stuff), then sit back and love this movie like I did.

"X-Men: First Class" tells the story of Charles Xavier, who would later become Professor X, leader of the X-Men, and Erik Lensherr, who would later become metal controlling Magneto.  As you know, Professor X loves the human race, and believes that peace through diplomacy and understanding is possible.  And you also know that Magneto thinks that mutants are the dominant life form, and that they hold the power to take over the planet and enslaving a human race that hates mutants.

The film shows their beginnings and finally their introductions, and shows off a villain that had been mostly unseen through all the previews, so much so that I didn't even know Kevin Bacon was in this film until about a week ago.  He plays Sebastian Shaw, a mutant bad guy (not the actor who portrayed the unmasked Darth Vader in Return of the Jedi) who in the comics is the leader of The Hellfire Club (which also includes Emma Frost), though "Hellfire Club" is only mentioned once in this movie.   Kevin Bacon is outstanding, which is typical for him, and the mutants he surrounds himself with, like Azazel (in the comics, the father of Night Crawler) and Riptide (who I'd never heard of until today) are pretty cool.

So, Sebastian Shaw is up to no good, giving a revisionists history to the events leading up to, and causing, the Cuban Missile Crisis, so Erik and Charles go out and find young mutants to help them defeat Shaw--like Alex Summers/Havoc (who in the comics is the brother of Scott Summers, aka, Cyclops, who is unseen in this movie)... and Angel Salvadore (who calls herself Angel in this film, though we know that the real Angel is seen in X3: The Last Stand, and in the comics, she's actually called "Tempest", and is known for her romantic relationship with Beak, an X-Man that I despised for just being plain stupid...)

Oh yeah, the good guys... there's also Banshee and Beast (who is shown to go from human to blue, hairy form here, even though in X2: X-Men United he's shown briefly as a news commentator and then in X3: The Last Stand, Hank McCoy is shown in the human form of Dr. Frasier Crane, but there's that continuity thing again) and of course, the lovely, blue Mystique, played seductively by Rebecca Romijn-Stamos in the first three films (and has a cameo here) and played wonderfully by Jennifer Lawrence in "First Class".

My problem with reviewing comic book films is that I want to just give you, the reader, way too much info about the comics and the characters when really, you want to know "Was the movie good or not?"

Yes.  It was good.  It was, in fact, great.  The story was easy to follow, the good guys were easy to like, the bad guys were easy to hate, and both James McAvoy (Charles Xavier) and Michael Fassbender (Magneto... if you told me that Fassbender and Ewen McGregor were brothers, or actually the same person, at least in this movie, it wouldn't take much to convince me) are fantastic in their roles.  I found myself wanting the movie to continue a little longer, if only to find out what happens to the characters, and for someone who's constant complaint about movies is "it was about 10/20 minutes too long", that is a high compliment.

Oh, and lest we forget January Jones as Emma Frost.  Isn't she just a cutie-patootie...