Movies That Are Just Wright

The Lovely Steph Leann loves movies, which is one of the million reasons I married her.  The fact that I love movies too is one of the millions reasons she said yes to me, so together, we watch a lot of television and movies together.  Sometimes, though, we just want to go to the moving picture show, and so we'll pick out a film and just go.

And a few nights ago, she up and says, "I kinda want to see that Queen Latifah movie."  I looked at her funny, and replied, "You mean 'Just Wright', the one with Common?"  She said, "Yeah.  It looks like fun!"

So a day later, after a good dinner at Baha Burger, we were on our way to the Rave Motion Picture Theater at the Patton Creek Shopping Plaza, purchasing our ticket for "Just Wright", starring Queen Latifah, rapper Common and a few other names here and there.

"Just Wright"
Okay... so the story goes that Common is Scott McKnight, an NBA superstar with the New Jersey Nets, runs into Leslie Wright (Latifah), invites her to a party and ends up falling for the, unbeknownest to Scott, gold-digging yet still good at heart childhood best friend and current roommate Morgan (Paula Patton).  When Scott gets severly injured, Morgan leaves him, and he falls into the hands of Leslie, who is a renowned physical therapist, to try to salvage his career.  Well, Scott gets better, Morgan comes back and things are not happy times for Leslie.

Much as I hated to say it, but I actually kinda enjoyed this film.  Don't get me wrong, this film will be nowhere near The Dave100, or even The Dave1000, but its an decent way to spend 90 minutes at the movies.  The problem was not only this movie being predictable, but the trailer giving away the entire plot.

However, this movie has a few things in its favor... first, Latifah and Common are both very likable in this movie.  Both roles are not very hard, so both have lots of room to wiggle in this.  Its fun to see Mrs. Huxtable playing what she does best--loving mom who isn't afraid to tell you what she thinks.  Also, Paula Patton is the "villain", even though she's not really a villain at all... she's not all that likable, but she does have a very final scene.  And in one scene, where she is told to "get out", a few of our darker skinned brothers and sisters hooted and hollered, and one stood up and clapped.

The Lovely Steph Leann and I both laughed, and I whispered, "I'm guessing its like that at a Tyler Perry movie, huh?"


Anyway, the final reason I liked this film is simply... its clean.  Very, very little language (a few "damns" and I think one "bull****"), no violence at all, other than aggresive play on the basketball court, and as far as sexual situations, there's one single scene where you know Leslie and Scott did the deed, but its the next morning and they are lying in bed looking at each other, completely covered by sheets.  I can deem this movie completely Emmy Turnbow Safe.   Its a good first date movie.

By no means spend $20 on this film, unless you are in fact on a date.  At best, catch a matinee, wait for the $1 theater, or get the DVD or watch it online this summer when it will probably come out.  For now, The Lovely Steph Leann will be stocking up on Common CDs.

“Orphan”
Okay... so Vera Farmiga and Peter Sarsgaard have two kids, an older son and a younger deaf daughter, and since they lost their third child in delivery, they decide to adopt. And they get this 9 year old Russian kid named Esther who is really just a mean, mean kid.

Bottom line, this movie is pretty terrible. Best thing about it? Only thing about it? Vera Farmiga. This movie is a great example of why The Lovely Steph Leann and I will be very cautious about adopting any Russian children. Especially those named Esther. Or Leena Klammer.

"The Last House on the Left" 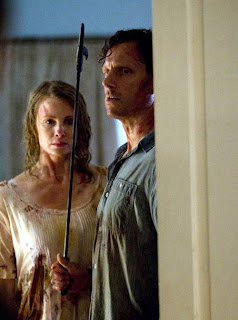 Okay... so, based on the 1972 film directed by Wes Craven, this flick stars Tony Goldwin and Monica Potter as parents of Mari, played by Sara Paxton, who are vacationing at a lake house.  Mari meets a chick named Paige, and they end up going with a guy named Justin to his hotel room (warning, warning, danger Will Robinson, danger!) to smoke some wacky weed... Justin's family comes home, they are absolutely insane, as well as escaped convicts, so they do some horrible stuff to Mari, including leave her for dead.

The rainstorms come in and the insane criminals, as well as Justin, seek refuge in a nearby lake house currently being used by... Tony Goldwin and Monica Potter, who take them in as a good samaritan act!  Go figure!  Anyway, Mari crawls back to her house, and they figure how the insane criminals that did this to their daughter are... staying in their home!!!

This plot sounds ridiculous, but I have to be honest with ya... I didn't dislike this movie nearly as much as I thought I would.  Actually, I thought it wasn't that bad.  It might have been the veteran presence of Tony Goldwin (Ghost, The Pelican Brief) and Monica Potter (Con Air, Saw) that gave it a little bit of credibility, but this movie doesn't try to be anything other than what it is--a nonsensical popcorn flick that is good for a random afternoon when you are flipping channels and nothing else is on.  Don't go buy it.  Don't spend money to rent it, unless you can get it on Netflix... actually, no, don't even do that.  That takes effort.  But if you see it's on tv, watch a for a few.

There is lots of language, violence and a rape scene, though that part is thankfully not graphic.

"Crazy Heart"
Okay... so, as I pointed out with Robert Downey Jr in "Iron Man", there are some actors who are just irreplaceable.  You take him out and plop someone else in that role, and "Iron Man” is not nearly as good or even the same movie, and the same with Denzel in “The Book of Eli”… Heath Ledger is definitely irreplaceable in “The Dark Knight”. Jeff Bridges in “Crazy Heart” is like that.

The story is rather formulaic, with Jeff Bridges playing country legend Bad Blake, a guy who has fallen on drunken times lately. He tours bars and bowling alleys, performing to get a few bucks here and there, spending much of it on booze. Things change, though, when he meets a small town reporter Jane (Maggie Gyllenhaal), who ends up falling for him and all his flaws. 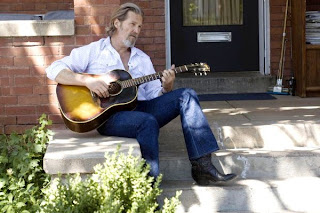 Of course, it’s not as easy as Country Bad Boy meets Good Girl and happily ever after… never is. Things happen, both good and bad, and Bad Blake’s story of redemption is told. My issue with the film is that I just didn’t see the chemistry between Jane and Bad Blake—as in, what is a pretty 30-something single mom doing falling for a 50-something, overweight, aged and withered old man? Its possible, for sure, but the love story presented in the film didn’t make me believe it, but maybe it just happened too quickly. Don’t get me wrong, Maggie Gyllenhaal is great, as she always is, but the romance part of the story is just a little out there.
What is to be marveled, though, is Jeff Bridges. His performance as a broken down, filled-with-regret country artist who used to be someone great is breathtaking and completely believable. When he won the Oscar for Best Actor for this picture, I know there were some people who thought it might have been a “lifetime award” rather than for the merits of this film, but having seen it, I’d totally disagree… he deserved it this time around.

Also making an appearance is Colin Farrell, playing Tommy Sweet, an up and coming country star that was mentored by Bad Blake—and now is by far more successful, much to Bad Blake’s chagrin. Farrell is good in his role, and isn’t needed more than the brief times he’s shown, and there’s a great appearance by Robert Duvall who himself played a troubled country artist in the film Tender Mercies , for which he won the Best Actor Oscar—never seen “Tender Mercies”, its on my movie to do list, which is probably in the thousands by now.

The movie has lots of drinking (the main character is an alcoholic), a did-not-show-them-doing-it-but-you-know-they-did scene and lots and lots of language. Its worth a viewing, though not one I’ll watch repeatedly.
written by d$ at 4:04 PM