they shall not grow old

I have to give full credit to my buddy Clay Shaver up in Detroit for really pushing me to watch more documentaries... since I met the guy in 2015 (well, in person... I've known him online since 2013... hashtag Love at AOL) we've discuss many a movie, and many of them have been documentary recommendations from him.

And 2018 was a strong, strong year for documentaries. "Won't You Be My Neighbor" is currently occupying my top spot in my mental list of "Biggest Oscar Snubs", and just as good -- and just as snubbed -- is the Gilda Radner biopic "Love, Gilda". On my agenda to watch in the coming days are "Minding the Gap" and "Three Identical Strangers", both films I've heard rave reviews on. 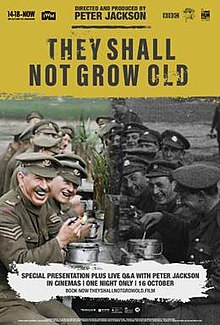 But I watched something last night that I just had to talk about, a documentary from Peter Jackson (the Lord of the Rings Jackson). He's a World War I buff and a project he's been working on for a while is this documentary. For me, it just kind of came out of nowhere, as I started seeing trailers for it at the end of December, leaving me wanting to see it.

I saw the Thursday night preview, so all following showing may or may not have what I was able to see -- a quick 2 minute intro from Peter Jackson, the hour-forty movie itself, then following the credits, a 25 minute "making of" feature, which is well worth staying for.

Jackson and his team pulled together over 100 hours of film footage and 600+ hours of audio, paring it down into what you see.  The narration of the entire movie is made up of voices of the veterans, each giving one or two lines at a time, sharing their stories. There are at least 120 different voices, so good luck trying to keep track, but the audio goes along with the footage you see on the screen (I doubt you'll much, if any, film of a soldier, with that soldier doing the narration).

Concentrating on the British war experience, the film takes you through the opening stages of the war, all the war propaganda and recruitment, then into the boot camp.  You spend a good chunk of the film in the front line trenches, those huge ditches dug at jagged angles all through the countryside (we are in Belgium for much of this), with the Germans a mere 100 or so yards away.  Bombs constantly going off, the narration voices tell us how they knew if you stood up too tall, or weren't paying attention, you could easily catch a bullet from a sniper.

Who knew that lice was as big a problem as the fear of bombs and bullets? The sanitation in the trench was pretty much zero, as shown by their toilet set up (imagine a pole on brackets, where you sit and take a dump, sitting next to four or five other guys doing the same thing). The rats were everywhere, feasting on scraps the dead bodies, bodies they couldn't do a lot with because they couldn't really risk going outside of the trench very far.


There is also a memorizing 15 minute sequence where the narration voices talk about the times when the soldiers would rush the Germans, the hand to hand combat, shooting people at will, even one voice cracking as he tells of shooting a soldier at point blank range, one who was mortally wounded and screaming in pain.


And finally, we see the terrible way the British soldiers were treated when they returned home upon the war ending.  No one would hire them, people were not interested in finding out their stories, they were basically ignored or treated as if they didn't just fight to save the world.

The after-credits feature is also a real gem, showing how Jackson and his team would scan the footage, do close ups to allow for panning, how they made the choice to colorize the film, how they synced up voices with what you see on screen and so many other decisions made to make this film come to life. The soldiers in the movie are never named, their ranks are never identified, its just a inventive and incredible way to show life in a British WWI trench, with pictures taken from 100 year old copies of War Illustrated to show the combat scenes.

Be aware, though it's not over the top, some of it is graphic, mostly through pictures of killed soldiers lying on the battlefield, many of which are missing parts of their heads, their faces, limbs and so on. And one guy's foot is totally jacked up due to gangrene. I mean, really jacked.  Yuck.

I loved this movie, and its sad to me that it's not Oscar eligible... they missed the submission deadline for this year's Academy Award eligibility, and because it's a 2018 film, they won't be eligible for next year's awards either. Which is sad because this was one of the 1 or 2 best documentaries from last year that I've seen, and even though its the 22nd "new to me" movie I've seen in 2019, its the only one that I give a 4-star rating.

It's worth noting that Jackson said he didn't involve historians in this movie because he wanted the veterans to tell the story through their own eyes. "It's a film made by a non-historian, for you, the non-historian"

And it 's worth the time.

And it's worth staying through the credits just for that ending song.

Email ThisBlogThis!Share to TwitterShare to FacebookShare to Pinterest
What's In It? documentary, movie review