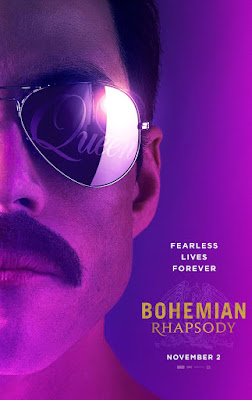 Queen is one of those bands who's music is so engrained in our society, so deep in our brainwaves -- from "Somebody to Love" to "We Are the Champions" -- it's easy to forget just how brilliant Queen, an in particular, Freddie Mercury actually was. Is? Are?

And that's the highlight of the just released "Bohemian Rhapsody", which I saw in a late show last night.

Let me back up and say that earlier this year, on The Deucecast Movie Show podcast, I made two bold predictions:

Results?  Lady Gaga has received widespread acclaim for "A Star Is Born", and will likely get an Oscar nod.  Rhapsody, however, has mixed reviews, and I'd heard a few movie pundits say that they didn't expect the movie to do well. In fact, the common criticism about it has been that it's a "fluff narrative", which only shows you the good stuff, barely touching on the bad.  And to a major extent, this is very true, so it depends on what you want to see out of this movie.

My bar for the movie had been lowered since I'd been hearing the negative (though it's 7.4 on IMDb, so that's not nothing), but I had every intention on seeing it anyway.

The movie starts with Freddy Mercury preparing himself for Queen's 1985 LIVE AID concert..

SIDEBAR:  For those of you not around in the 80s, or not paying attention, that's when concerts for plights of the world came to prominence.  From the "Do They Know It's Christmas?" music to "We are the World" to Willie Nelson's Farm Aid to help farmers, the 80s were a time where rock stars of the day would play music and you'd send in money to help that cause. Live Aid was a global concert to help the children in Ethiopia, suffering due to a destructive drought happening. The concert was taking place simultaneously in, among other places, Canada, The Soviet Union, Japan, Yugoslavia, Philadelphia PA and notably, Wembley Stadium in London.  An estimated 1.9 billion people watched at least some of it, which at the time was around 40% of the population of Earth.  Massive.

...and as he takes the stage, it cuts to 1970, showing him working as a baggage handler, then coming across the band Smile, which featured future bandmates Brian May (Gwilym Lee) and Roger Taylor (Ben Hardy).  Freddie joins the band, then they bring on John Deacon (played by the kid from Jurassic Park, of which I was stunned when I saw him), and soon after, Queen is born.

The movie clocks in at 2 hours and 15 minutes, and though long (and it does drag in a few parts), it covers so much ground at a breakneck speed. One minute they are selling their van to buy studio time to record an album, and two minutes later, they are the biggest band in Europe, working on their 4th album, fighting for the right to release "Bohemian Rhapsody" as a single.

While the movie is about Queen. it's the musical life of Mercury that drives it. His rise, his falling in love with Mary Austen, his peak, his sexuality, his bottoming out and his return to the stage, with the movie ending right where it started -- him going onstage, followed by the rest of Queen, for their Live Aid performance.  Incidentally, I didn't know until yesterday that many critics consider the 21 minute set to be the greatest live performance of all time, with his acapella back-and-forth with the audience containing what is called "The note heard round the world" (you'll know it when you hear it)

I actually watched the real 22 minute version of the concert set, and honestly, the movie is pretty close.  My movie was at 10 last night, and when it was over, I walked into the IMAX theater (theirs started at 1030p) just in time to see the concert scene again, which I enjoyed even more than when I had seen in 20 minutes prior.

The critics weren't wrong, by the way, when they said it was a fluff piece. It is a bit uneven, as it gives you flashes of Mercury's demons but never digs too deep or spends too much time in the mud, and even his breakdown ends up turning into his shining moment at the end. His sexuality is treated with kid gloves, showing how he slowly realizes he's gay, then faces no consequences for being so (this is the late 70s, early 80s by the way).  In one scene you can see he's been doing cocaine, but that's the only time before or after that hard drugs are even mentioned -- much of it is implied, but never shown. The only bits of intimacy truly are him kissing Mary, the girl he loved early on, then later kissing a couple of guys.  Sex is also implied, but never shown and only alluded to once or twice.

The supporting cast is outstanding, especially Gwilym Lee as Brian May, who, if Freddie is the heart of the band, is the moral compass that keeps it together.  The Kid from The Social Network and Ben Hardy (Deacons and Roger, respectively) both play their part well, and Lucy Boyton is wonderful as Mary, the lover turned best friend of Freddie. Of course, the star of the show is Rami Malek, who is balls to the wall the entire movie, embracing every nuance, every quirk, putting that little umph into every skip step  that Freddie takes -- with the flamboyance ever growing as the movie goes on, this was not an easy role to master.  Whether he mastered it or not is up to the viewer, but I'm not sure you could ask for much more.

One of the real treats of the movie is watching the small scenes as the now familiar classics start to take shape for the first time... where Brian May, Freddie and Roger are all in an argument while The Kid from The Lost World: Jurassic Park begins to strum a riff on his guitar, one that is unmistakable and becomes "Another One Bites the Dust". Or where Brian May gets everyone in the studio on the stage and leads them in a series of stomps, saying he wants a song that the audience can participate in. "Okay, after you stomp twice, let's clap." STOMP STOMP CLAP... STOMP STOMP CLAP.

And as the trailer shows, a good 15 minutes is lent to the creation of "Bohemian Rhapsody", including the stares from the bandmates as Freddie wants to use opera themes, and the resistance from EMI Record exec Ray Foster (an unrecognizable Mike Myers)

All in all, it's a good movie. Not a great movie, but a good movie. One that a day later still has me humming the chords to "Somebody to Love" and "Fat Bottomed Girls" (though that one isn't really even referenced in the movie). I can see how diehard Queen fans will love this, or even hate it for not being as truthful as they may want.  In fact, the movie does take some wild swings with truthiness, showing the band breaking up due to a decision Freddie makes, and reconciling later, when in truth, the whole band was ready to walk, and they had reconciled long before the movie suggests, as well as Freddie telling the band he has AIDS before Live Aid performance, when in real life, wasn't diagnosed with AIDS until 1987, two years after the concert.

At one time, actor/comedian Sacha Baron Cohen was slated to play Freddie Mercury, but he dropped out because of differences between he and Queen band members May and Rogers...

SIDEBAR:  John Deacon has very little to do with the band at this point -- his relationship with May & Rogers is reportedly good, he just decide to retire after Freddie's death, performing with the band less than five times since 1991, and not at all since 1997 -- he didn't even attend the band's induction into the Rock n Roll Hall of Fame in 2001, though May has said that Deacon approved of the film "Bohemian Rhapsody".

...because Cohen wanted the movie to be solely focused on the rise, fall, rise and death of Freddie Mercury while Queen wanted the band to be more central to the story (and likely taking out some of the edgier and more terrible parts).  Ultimately, the band won, Cohen walked and Rami Malek was given the part.
Anyway, I liked the movie... I didn't love it, but I really enjoyed parts of it, enough to be satisfied with... still, I would have enjoyed more a deeper dive, perhaps an R rated film and not just PG-13, to give me more about Freddie Mercury than a few bad incidents..