There is someone on Facebook--I wont say who--who, every time she updates her status, she capitalizes each word. So, rather than saying:


Can I just say... this drives me nuts? I mean, it shouldn't, but it does. Drives me up the wall Every Time I See A Facebook Status Written Like This. Oh, I know what you are going to say--why not just de-friend her?
(opening new browser page... logging onto Facebook... finding offending status-leaver...)
Yeah, good idea. Solved that problem.
Speaking of un-friending...
I remember when I was a small child, living in Austin, TX, apartment 320 of The Villa Rio Apartments on Airport Boulevard. I was maybe 5 or so, and there were two chicks in the complex that I talked to. One was named Janet, a year older than me, and I was jealous because she got to go to kindergarten and I stayed at home. The other was Danielle, a tall girl, also a year older than me, who had a slight limp. One of her feet was turned inward for some reason--not that this mattered, I mean, I was 5 and was friends with anyone and everyone (except for that creepy guy in the white car who stopped and offered me candy to get in while I was walking back from the 7-11 with the latest issue of Mad Magazine--I didn't like that guy).


Well, Danielle and Janet and I were friends and we played as 5 and 6 year olds do, but every now and then, one of them would make the other mad and then that one would come to me and tell me not to be friends with other one. "Don't be her friend anymore! She did this to me... " and then they would lay out the crime that had been committed upon their youth. And for a day or so, I'd try not to be their friend, but I'd end up being their friend anyway... and of course, I'm sure Janet would tell Danielle not to be d$'s friend (actually, my last name then was Creech. No, I'm being dead serious. Did I ever tell you guys I was adopted?) and that would explain one of them, or both of them, not talking to me for a whole day.
That was real un-friending? Now... its a low tactic of secret disassociation. Admit it... sometimes it at least makes you wonder, if not drives you nuts to see your friend total end on the number "8" one day, and "7" the next... its not a big deal, that's fine if you don't want to be my friend, but at least tell me why, right? 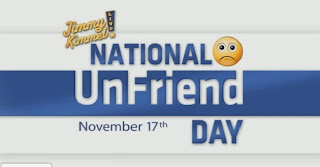 So, yesterday, November 17th, was in fact "National Un-Friend Day", according to talk show host and comedian Jimmy Kimmel. There is a fascinating opinion piece on HuffPo about this (I know, I know, most of HuffPo's political opinions are worth about as much as used paper following a big plate of Nachos Bell Grande at the Bell, but sometimes they do have good stuff to say on things that aren't political), where the author jokingly suggests that Facebook give you a template to make the unfriending of someone a bit easier...


Jason Kitchens writes:  Dear Timmy: you've been unfriended by Billy due to the fact that, despite only meeting on one occasion during the Carter Administration, you insist on sending those insufferable invitations to assist you in building a make-believe pigpen for your virtual farm. You do so incessantly and without regard for societal norms that exist in real life (a world you might consider visiting from time-to-time). Therefore, you are officially no longer deemed "friends" with Billy. Grievance counseling is available for those with health insurance via the following link..."
And in the spirit of the Kimmel-created day, I did my own scanning down the list of friends. Understand, I have a lot of friends in the real world, many of which do not have FB accounts, or check them much if they do. And I have a lot of "friends" on Facebook as well... some of which... well, I don't really know how they have access to my page. I'm one of those, close up the page, hide the pics unless you are my friend kind of guys, so for those of you who are on my "friend" list, you have a smorgasbord of information, pictures and other meaningless propaganda that the other 5,999,999,050 people do not have. Consider it an honor.
"Remember how, five years ago, when no one was on Facebook and you didn't know what the guy you took high school biology with was having for lunch?  Remember how that was... fine?"
But in scanning, how do decide to who chunk, and who to keep? Surely, I don't talk to 975 people on weekly, even monthly basis. The list of people that I talk to daily runs about two deep. I live with and am married to one--The Lovely Steph Leann--and see the other six, if not seven days a week, am close to and work with, that being Melanie Z. Doesn't hurt that both are highly, highly attractive people.


The list of people I talk to weekly runs, I dunno, forty, fifty, if I had to throw out a ballpark number... people like JustFish, Emmy Turnbow, C'ray and S'ray, J Taylor, etc, but if I don't go to church that week, that number drops dramatically.
But that still leaves a number of people who don't fall into either category... so how to decide who to keep and who to punt?
Well.. here's who stays:
I'll be completely honest--were it not for my desire for readership on what I write, I'd probably whittle my entire list down to about 400 people or less.  But, as it stands, I know that link in my status is worth something to my page loads.  So there it is--I'm a narcissist.


I would say most of my "friends" on Facebook fall into those above listings. However, about 50 people did not. And... well, they got booted on National Un-Friend Day.  This is going to sound so, so mean, but let's be honest with ourselves--I am sure that when I am unfriended, its much of the same thought processes...
Just about anyone that, if I saw in the supermarket, I might walk an extra aisle over to avoid--not that I don't like them or anything, its just the whole "hey how are you, I'm good, how is life, yadda yadda" that we'll forget the next day.  People who I don't know well, or used to know well and aren't really all that concerned with keeping up with, or will serve me no purpose in the future, or I have no pics of, or I am pretty sure don't ever look at Clouds.  Oh, and if you don't even smile or wave at me when I see you in church or around town, you are outta there.  And, if I see you on FB chat and it takes me longer than ten seconds to figure out who you are?  Gone.

There is a safe list, of course... people who I'd never dream of dropping on FB.  And some of you, I'm sure, want to be on that list, some of you probably don't care either way--but to be on it, then make sure you are my real friend, not just my virtual friend.  Otherwise, come November 17th, 2011, I might trim more FB Fat.

Oh, And It Doesn't Help If Your Status Reads Like This.
written by d$ at 3:58 PM