So, hey!  Happy New Year!  So you may be thinking "Oh, it's the last day of 2020, so this must be the favorite book list of 2020, right?"  Nope... I have had this draft, half-written, in my drafts for 8 months, so I thought since 2020 is not officially over yet, it would be a good time to finish it...
So here is my report on books read in 2019:
Every year, I list my Top Ten Fave books of the year, and while they can be from any year, they have to be first time reads for me.  In 2019, I actually only re-read two books, both I've read several times through the years, leaving the rest as brand new.  Of course, when I say "read", I do mean audio, because that's reading too... to the tune of 344 hours listened to via Audible.

So let's look at the books I read that didn't make the top ten... and I'll number them - not by the order in which I read them, but just to keep track of how many (for my own purposes because I'm bad at math)

THE COMEDIANS
These are a handful of books written by actors and stand up comics, usually telling their story with lots of jokes and such

I was all in on the first season of "The Unbelievable Kimmy Schmidt" on Netflix.  The star, Ellie Kemper, I found to be just flippin' adorable, and so when she released (1) My Squirrel Life, a memoir of sorts, I had to grab it. In fact, it was the very first book of 2019 for me... and I was delighted. Its short, its sweet, and it's fun... though I cannot tell you that I remember much about it. I just remember liking it. 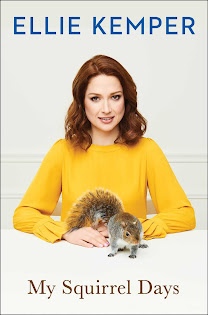 When my friend Amarylis (by morning, up from San Antone) said she had read David Spade's
(2) Poloroid Guy in a Snapchat World, I nodded. I had been circling that one for a while on Audible, and was trying to decide if I wanted to read it.  I finally pulled the trigger, and liked it. He's got another, Almost Interesting, and I'm undecided. Perhaps.

Another comedian I enjoy is Greg Fitzsimmons, and had heard Fitz discussing his book (3) Dear Mrs Fitzsimmons on the Adam Carolla podcast.  The book is somewhat of a memoir of sorts, told through a series of letters filled with funny stories of growing up.  I found it amusing, but it wasn't my favorite.  It was a well done book, just not my jam.
Finally, Annabelle Gurwitch, who I've always loved from the old school Dinner & a Movie program on TBS, put together a collection of monologues and essays called (4) "Fired! Tales of Jobs Gone Bad", as she, plus comedians like Taylor Negron, Paul F Thompkins, Dana Gould, Paul Feig, and more tell tales of how they were kindly -- and unkindly -- asked to leave various jobs. Hilarious.

My unspoken, unconscious vow to read all Grisham novels continued in 2019, as I read the older classic (7) The Chamber, about an idealistic law student who is trying to save his racist grandfather from the electric chair. Grisham books are never bad, but this one was a little sluggish... I also watched the movie of the same name, starring Chris O'Donnell and Gene Hackman, aka, "The movie where Hackman destroys O'Donnell in every scene he's in".  So, I can say that The Chamber part of my life is closed for good.  Not so with (8) The Reckoning, however, which tells the story of Peter Banning, who one day long ago drove into a small town and shot in cold blood the local preacher, then gave himself up.

The power that Stephen King has on me is pretty ridiculous, as I do read -- and always have read -- anything he releases.  It's a little personally unnerving, as he politically hates me, but I'm still a fan.  One book that had previously eluded me, and intimidated me, was (9) Four Past Midnight, which contains four smaller... and smaller is a relative term, as this sumgun is just under 30 hours on audio... novellas, including "The Langoliers", about a very unfortunate, dark flight into madness... "Secret Window, Secret Garden", about an author who's own characters are driving him into madness... "The Library Policeman", about a library who's secrets are simply madness... and "The Sun Dog", my favorite of the bunch, about a very sinister Polaroid camera. And yeah, madness.

I dug the book as a whole, and it skirted my Top Ten, as did The Reckoning, but both authors have books in my Top Ten of 2019 already.

THE WRASSLIN BOOKS... AND ANOTHER SPORTSER BOOK

Read two books on the fake sport that I love so much... and yes, I realize that while it's fake, the injuries are very real and so on and so forth. but nonetheless, first up was (10) Best Seat in the House, by former WWE and now current AEW announcer Justin Roberts. One of Roberts lifelong goals was to be a wrestling announcer, so it gives his take on his pursuit of, and finally achieving that goal -- and as all know, sometimes that goal isn't all we wanted it to be.  It's got some great stories, and I believe him, though it does come across as a little whiny in a few spots.

The other was by a guy named Sean Oliver, who has been around wrestling for a long, long time. In this book (11) Kayfabe: Stories You're Not Supposed to Hear from a Pro Wrestling Production Company, he does in fact tell some stories, though I'm unsure of whether I should have heard them or not.  The book is more of a history of his production company, Kayfabe Commentaries, which does extensive interviews with past and present wrestling superstars, and releases them on DVD and digital. The book does chronicle stories from the world of WWE, WCW, ECW, and more, and though I enjoyed the stories, it did come across as a long advertisement for his studio. 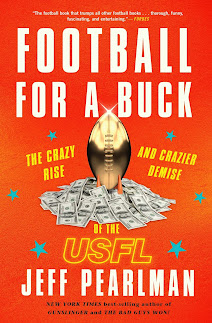 For the uninitiated... "Kayfabe" (kay-faybe) means "in story". As in, when wrestlers are in a match, they are in character, and you stay in character before and after a match. You never "break kayfabe" unless it's something major, like a serious injury, or you are "shooting", which means you are talking real life in a ring. When someone breaks kayfabe, and shoots, it's always entertaining. See CM Punk's "Pipebomb" or Nash & Hall's big hugs before they left WWF in the 90s.

While not Wrasslin, it has nowhere else to go, so I'm sticking Jeff Pearlman's (12) Football for a Buck: The Crazy Rise and Crazier Demise of the USFL here. The subtitle explains it all, and it's an excellent bit of sports history, and the words "crazy rise" and "crazier demise" are right on point. It's a wild story, and yes, Donald Trump added to that second part.

Does it count if there is only an audio book, and not a tangible book?  Well, I'm counting it anyway, so there.

Author Curtis Sittenfield wrote and released a short book called (13) Atomic Marriage, about a hotshot Hollywood writer who is sent to a small Alabama town to interview a pastor who has written a book about marriage. A 12-step process, actually, on how to stay together physically, emotionally, mentally and so on. Of course, Heather, the writer, has her doubts on what this Alabama hick can teach her (and honestly, I was a little timid on how it would treat the South) but to my, and the reader's, delight, that's not at all what happened.  It's a wonderful little book, even with the ending that seems to just... well, end. I liked this quite a bit, and I wished it was actually longer.
In all my years of listing my Top Tens, the first time I ever listed a book purchased at a book fair was... well, right here. (14) "Where is Walt Disney World", part of a "Where Is..." series, this one by Joan Hulab. It's pleasant, written on a kid level, giving general history and location of The Most Magical Place on Earth.
----------------------------------------------------------------
STAGE PLAYS & SCRIPTS
I'm a huge fan of stage plays and screenplays. I have a few on my bookshelf, and I like the way the word is presented, as opposed to a narrative (much like "Harry Potter & the Cursed Child" is done, but I just can't bring myself to read it yet.)
So I knocked out several of these, including (15) I Love Lucy: A Funny Thing Happened on the Way to the Sitcom by Gregg Oppenheimer, about the creation of the classic television show by way of Lucy and Desi. Enjoyed it, though wanted more from the story.
David Mamet is one of my favorite playwrights and so I found (16) Speed the Plow to read. It's about a Hollywood producer's who's influence is tested when he's torn between a promising script and a hot chick. If I had a dime for every time I had to make such a decision...
(17) The 64th Man, by Bryan Tucker and Zach Phillips, is about a washed up athlete trying to get back in the league while dealing with his own love life and family. I found it... boring.
Neil Simon is one of my favorites, and I've been picking his plays up all along for the last few years, and in 2019, I liked (18) Lost in Yonkers, a Pulitzer & Tony Award winning play about two teens living with their grandmother in Yonkers during World War II.  The other Neil Simon play I read in 2019 will be coming later.
Another drama that I didn't enjoy as much, though still was drawn into, was (19) Dinner with Friends from Donald Marguiles, a Pulitzer Prize winning story of two couples, their secrets, divorce, and friendship. It's heavy.
Finally, there was (20) Top Secret: The Battle for the Pentagon Papers, by Geoffrey Cowans and Leroy Aarons, about the struggle the Washington Post had to release the classified US documents about the Vietnam War.  It was engaging and tense, even though I knew the outcome.
Check Out the Second Part of the NOT TOP TEN BOOKS OF 2019
And then Check out the TOP TEN BOOKS OF 2019
written by d$ at 10:35 PM