(Warning. This is a true life story of my aunt and the ordeal she faced in 2011. Though I don't get too graphic, the things I say in this post are very uncomfortable and terrible.  Read with caution.

It's also important to note that this post is an emotional response to the program I'm watching, the "Surviving Evil" episode that centers on what follows in this post. This is the story that I know.)

I'm watching one of my favorite channels, one called Investigation Discovery. Usually, I fill up on Dateline NBC, or maybe a great episode of 20/20 or even 48 Hours. I'm a sucker for murder mysteries, true life crime, I've even read several books having to do with cold cases and such... Kathryn Casey is a marvelous author of murder crimes in Texas, and I've read nearly everything she's done.

Tonight's show on Investigation Discovery is a little different... it's a show called "Surviving Evil", and each episode centers around someone--usually a woman--who makes it through what is a brutal ordeal in her life. The hour long show features two stories... the first one was a girl named April Sykes, who was essentially set on fire by the man who assaulted her.

The second story is my Aunt Judy Murrell.

Judy is the youngest sister of my mom and my other aunts, and has been single for a while now. She has two grown sons, my cousins, who are both in the military, tough guys, but solid men who serve our country. She also has a daughter named Jennifer, who is now in college.

Living in Andalusia, Alabama, she lives with her daughter, but lives a simple life, a single life... sometimes, many times a lonely life. And that's why it was okay for her to find favor with someone that in normal circumstances no one would ever want to really spent much time with. Judy is a wonderful woman... she is so proud of her sons, she's proud of her daughter, and she loves her family so much.

Our little story is how when I was a baby, I would sleep on her chest... and go to the bathroom on her.  I was like, one, so don't judge too much. She's always been warm with me, with a big hug and she loves The Lovely Steph Leann and oh, does she love her some Campbell Isaiah.

In early 2011, Aunt Judy met Raul Del Toro, a smooth talker from Cuba who showed her just the kind of attention, said just the kind of words that a middle aged single mom from a small town wants to hear. They went out, they got close, and though he wasn't the ideal man in the eyes of Aunt Judy's older sister--my mom--or her daughter Jennifer, hey, it's Judy's life, right?

But over time, Judy began to notice something... Raul began to control more and more of the things she would say and do. He opposed her wearing anything like a tank top, or shorts he thought were too short, he made her quit her job at a local factory, convincing her that he would take care of her financially... he would routinely go through her cell phone to see if she was "running around" on him.

One night in March of 2011, he had a little too much, things got out of hand, he got violent and busted Aunt Judy's lip. She was able to call the police, and they arrived. She told police that she just wanted him to leave--Raul complied... why didn't she have him arrested for assault? He had already threatened to kill her if she ever had him thrown in jail.

A few weeks went by, and he came back around. Smooth talking as always, he charmed his way back into her life, back into her small town Andalusia home. Jan, the sister (and my mom), had already convinced her to get a gun just in case, and Jennifer, the daughter, had already decided to not stick around when Raul was there.

Raul was in Aunt Judy's home, and they began to argue again. This time, he wanted to see her phone to see what she'd been up to, and in a fit of anger, fear and maybe just annoyance, she threw it against the wall, shattering the device. It was then that the nightmare of the next 12 hours started for my Aunt Judy.

He hit her. He dragged her purse down, rifled through it and pulled out her drivers license, then burned it, to show her that she was a nobody. He then pulled out the gun that Aunt Judy had stashed away, telling her how he found it in the house already.

Raul dragged her into the bedroom, her OWN bedroom, in her own bed. She begged him not to kill her... or at least, not to kill her there--she pleaded that she didn't want her daughter to come in and find her, so if he was going to kill her, to take her somewhere and do it. Raul, in a random act of what he probably thought was kindness, agreed that we wouldn't kill her there. He would take her elsewhere. Either way, he expressed the fact that she would die very soon--but he told her he wasn't done with her yet.

He went to the closet and began to pull out her clothes, using a knife to cut them, shred them, destroy them. Raul turned to my Aunt Judy and made her strip. He then attempted to rape her. When he was unable to do what he wanted, he did what might be the most horrific thing I can think of--he raped and assaulted her with her own gun. He hit her, he cut her with the knife... and then in a final show of humiliation, he dragged her in to the bathroom and chopped off huge amounts of hair.

Aunt Judy has always had big, poofy, thick brown hair and she has always kept it long, for as long as I remember... and he chopped it. He cut it. He tore at it. Leaving her destroy, leaving her used, leaving her... he wanted to leave her ugly, to make sure she knew that no one would want her.

Raul Del Toro had been with her for nearly 12 hours. In that time, he raped, assault, beat and tortured... TORTURED... my Aunt Judy. And he degraded her. More than anything else, he degraded her in every way he knew how to do. 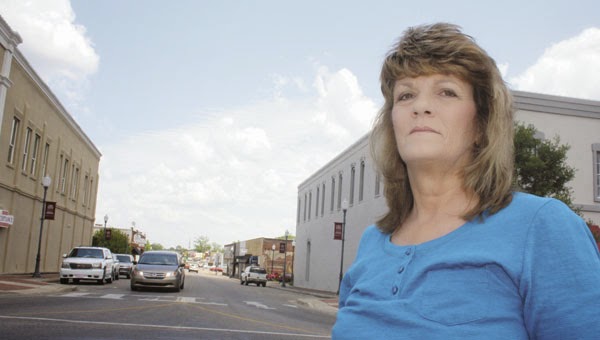 As the sun came up the next day, he made her put on a baseball cap, and then... then he hugged her and told her that he loved her. She asked that even though he loved her, he was going to kill her, to which he simply said yes.

He then dragged her outside to the vehicle in the yard. My Aunt Judy got in, and was forced to put the seat back. Raul Del Toro got in and began to drive to whatever spot he had decided to end her life. He was going to take her outside of town... and shoot her. If she was lucky, just a quick shot. But he said he was going to shoot her in the back and see how long she would crawl before she died.

If you have lived in any small town long enough, or even in a neighborhood long enough, you recognize more than what you see on your left and right. You will recognize what you see up above too. So as my Aunt Judy lay back in the seat, bruised, bloody, violated, swollen, she could tell by the turns the car was making, and by what she saw in the upper part of the car window that they were going through downtown Andalusia.

This was now or never. She knew that if they got past downtown, past where people lived and worked, past where the town's businesses were just waking up, then it was over. If my Aunt Judy was going to act, she would have to do it now.

Instinctively, she grabbed the wheel and yanked it. The car jerked as Raul Del Toro tried to gain control back. The car swerved, around and swung into a Dairy Queen parking lot before it came to a stop. A struggle in the car ensued, and the gun, my Aunt Judy's gun, the gun Raul Del Toro had been holding, the gun was fired three times. Three gunshots blasted into my Aunt Judy, one in her chest, one in her pelvis and one into her stomach, shredding her spleen and kidney.

Raul Del Toro got out of the car and walked away. My Aunt Judy managed to get her seatbelt unbuckled, opened the door and fell out of the car in a bloody heap. She was able to stand up some, waving for help, before collapsing unconscious.

I was at home. I got a phone call from Jan that something had happened. Something about her boyfriend or her ex boyfriend had assaulted her or hit her or something or... and shot her? Like, my Aunt Judy got shot? Three times? What are you talking about...?

Over the next 24 hours, I slowly got the details, those details that I couldn't understand because who does this to someone? Who sexually assaults someone with... a gun? Is this real?

My Aunt Judy lost a lot of blood that night. She spent many weeks in the hospital, suffered through many surgeries, and lost her spleen, her gall bladder and part of her stomach, as well as dealing with severe kidney damage. Family rallied around her, many prayers were said for her, and she slowly began to recover physically.

Emotionally, however, is a much longer recovery. Three and a half years later, she still cries at night, she still has trouble sleeping, she deals with depression. My Aunt Judy credits two things that keep her going--God and her family. She has faith in both.

My Aunt Judy is a brave woman. She dealt with more in 12 hours than most of us will have to deal with in a lifetime. She wasn't merely violated, she was destroyed in her own bedroom.

As for Raul Del Toro, he walked away from the scene, and was actually picked up by the Sheriff's Department walking down the highway out of town. He had the wherewithal to do everything he did to my Aunt Judy, but didn't have the common sense to run and hide. And he's very lucky that John and Steven, my Aunt Judy's two sons in the Army and Marines, didn't get a hold him first, because that would have been a bloodletting the likes of which we haven't seen in a long time.

Raul Del Toro is now serving two consecutive life sentences, and will be eligible for parole in about 25 years. I hope he receives in the prison bathrooms from an inmate nicknamed Sweet Sweetback that which he bestowed upon my Aunt Judy.

I love my Aunt Judy. She stands tall now. She deals mentally and emotionally with everything, and probably always will. But she survived. She lives. And for that, I thank God.
written by d$ at 12:52 AM