I was originally going to do this review as a part of a Dozen Movie Dash, which is a random post that I do giving quick reviews of a dozen recently seen films (which, until last night, I didn't realize how random, as I haven't done one since 2014)

As a part of the DMD, I figured I'd talk about "Tag" and "Action Point" and maybe Dolly Parton's "Nine to Five" that I just watched, and of course, talk about "Jurassic World: Fallen Kingdom", which I saw this weekend...

Then I realized my review was longer, so taking on 11 more films would make this an obnoxiously long post... not that that has stopped me -- I mean why say in 500 words what I can say in 1500, amma right?  Up top!

So I figured I would just give this it's own post...

The reviews for this have been all over the map -- it sits at 50% critics and 62% audiences scores on Rotten Tomatoes, and 6.7 on IMDb, and after watching it, I could see where someone would love this movie, and where someone would hate it.  If you wanted more of the same as "Jurassic World", then you get it -- if you wanted a different story, then you are out of luck. 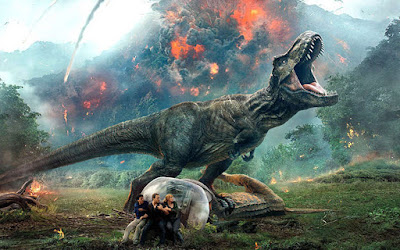 Without giving too much away, the general story is the Claire (Bryce Dallas Howard, who I really like, though I'm more a Jessica Chastain fan in the "Pick one of the two actresses that are nearly the same") is recruited by the extended family of John Hammond (Richard Attenborough, from the first film, though he is only referenced -- Attenborough died in 2014) to go get the dinosaurs on Isla Nublar. The island is being destroyed by a volcano, and Claire, who has strong armed Owen (Chris Pratt) into coming along, is to assist in getting a least a few of each species onto a transport ship, where they will be taken to a new habitat to live in peace for the rest of their days. But, of course, not is all as it seems.

Here's the thing... we love dinosaurs. And in "Jurassic Park", we got them... and they were amazing. They were incredible, unlike anything we'd ever seen.  With "Lost World Jurassic Park" and "Jurassic Park III", some of the luster was gone, as the story was sacrificed to show us more impressive dinosaurs.  So when "Jurassic World" came along, some 14 years later after JPIII, we were ready to be dazzled again, and we were. A new generation of teen fans were discovering the T-Rex and the raptor and other extinct creatures, with new characters and new story lines and more!

But something happened between "World" and "Fallen Kingdom".  They pulled the checklist out and made sure that what made the first one so good would also be in the second one...

And, something I've dubbed Dino ex Machina.  Remember in the very first Jurassic Park, when Grant and Ellie and the kids are surround by raptors in the lobby of the main building of the park?  All hope was lost, they were about to get eaten... and suddenly, the T-Rex comes out of nowhere to save the day??  And then at the end of "Jurassic World", Claire and Owen and the kids are cornered by Indominous Rex, and are about to get eaten... and suddenly, a giant sea monster comes out and eats them??

When the dinosaur pulls a deus ex machina and improbably saves the day. And there are several of these moments in "Fallen Kingdom", by the way. It's lazy writing and was a little irritating.

SIDEBAR:  The official term is "deus ex machina" and is from a Latin translation of a Greek term "god from the machine."  It's defined by Wikipedia as "a seemingly unsolvable problem in a story is suddenly and abruptly resolved by an unexpected and seemingly unlikely occurrence, typically so much as to seem contrived.

My own personal favorite example of this is in the movie "Dodgeball: A True Underdog Story" where Peter, played by Vince Vaughn, has sold the gym to White Goodman - Ben Stiller - and despite winning the tournament, is still under threat of demolition by Globo Gym... until Peter wheels out a literal treasure chest, informing White that with the money he got from selling Average Joe's Gym, he gambled it into enough cash to purchase the majority stake in Globo Gym, thereby now owning both gyms.  And on the treasure chest?  "Deus Ex Machina".  It's a brilliant joke that I think a lot of people never notice.  Thus, when a T-Rex or other dinosaurs suddenly rescue our heroes... Dino Ex Machina.

Overall, despite the last several paragraphs, I enjoyed the movie. It was loud, it was a little tense (though the fate of the main characters were never in ANY question), and the CGI was good. The best part of the film is what takes place on the island, though we are done there by the first half hour, and its onto the rest of the movie.  It's nice to see Dr Ian Malcolm (Jeff Goldblum) but he's completely under utilized in his bit parts.

I guess you could say this movie is "Brain Candy", meaning, its loud and blowey uppy and roar filled and people in danger but the real people we love are never in real danger, and Brain Candy isn't a bad thing. Its a movie you don't have to think about, it's a movie you can just watch and not be encumbered by the thought process... but that pro is also a con, because the original "Jurassic Park" is a very smart film at it's core, even with it's absurd premise.

So go see it at the theater to get the full scope of the visual and audible... but keep your expectations lower than you want. 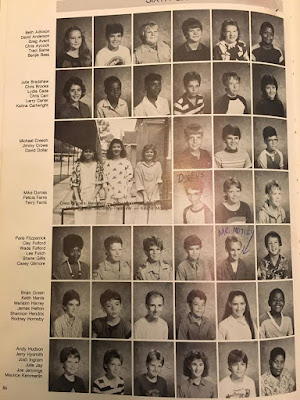 So... hi.  It's been a while. I keep thinking I'll blog way more than I have, so I'll just admit, I have no idea when another blog is coming.  No clue. So enjoy this one.

Did you know that I just celebrated 25 years being a high school graduate?  (In March I also crossed the 20 year mark as a college grad -- GO TROY STATE -- but I kinda forgot about it until... well, like, just now.)

So last week, I took pictures of, then posted onto Instagram (@davedollar) and onto Facebook my 7th grade class.  I thought this summer might be a good time to spend uploading a few pictures, with my ultimate goal being to scan my yearbooks in their entirety and put them in Facebook albums... kind of a "Summer of The Class of 1993" of sorts, without the official title, and the official committment... because if I forget to upload (which is why I'm doing this now and not yesterday--Thursday), then no loss. 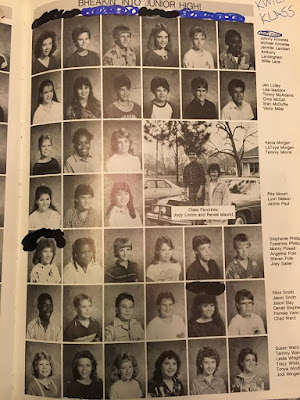 You may wonder why I didn't post the 6th grade class last week, but instead doing them out of order... some of you OCD folk may be all like "7th than 6th??  What kind of monster is he??"

I did this for two specific reasons, neither of which are that I forgot. No, I did it because of those black marks you see above Stephanie Phillips, Misty Kimble's, Jennifer Lambert's and Nicki Vann's heads.

Not too long after we got the yearbook, whenever that was, myself and four of my buddies wrote our names above the girl we thought was the prettiest.  Not an ownership, mind you (Settle down, #MeToo), but more of a "This is who I want to go with".  A year later, I was petrified someone would find it, so I blacked them out with marker.

SIDEBAR: How many iterations of "dating" have there been?  "They are an item" and "Going steady" were before my time... in my day, it was "Go with".  Soon after, it apparently became "Going out with".  Unsure what it might be today.  Probably something to do with being on fleek or making rhymes like "hey hey my bae" or some such nonsense.

Considering it's been 31 years at this point, I don't mind saying that I wrote my name over Misty Kimble's picture.  She was my first real crush, and I think I spent 4th through 7th grade moving between "kinda liked" and "loved". She actually knows this (but not in 1987 -- I would have been mortified), and thinks its funny.  As for Stephanie, Jennifer and Nicki... well, those names will remain with me.  Mostly because I've forgotten one, I'm not positive on one and sometimes mysteries are fun... because they probably don't remember either.

For the record, Greg Avant, who spent his later years pining for Jennifer Lambert, was none of guys who played this game in my yearbook.  Just to clear that up.

Moving beyond that, I did something in my 6th grade yearbook that for some reason, I didn't do in any others... I documented the 1986 to 1987 school year.

Shannon Williamson joined us in our 6th grade class this year. She's crazy, weird, but really likeable. She'll really clear you up when you're down.  I went to the junior high building for the first time as we entered the junior high years. Ms Whittle was my favorite teacher over Coach Champion, Coach Weeks, Mrs Rials, and Mr White. My favorite subject was Social Studies. Michael Knowles, Greg Avant, and me became ketchup brothers (we were chicken to use real blood).

Marianne Harvey, who me and Greg used to tease, moved [note--For what it's worth, Marianne, I'm really sorry I was a jerk].  I met Allen Wise. Aka needle-nose, who was teachers aid in PE.  The Tigers had their first winning season in a long, long time. This was the last year at good ol' SHS. I was conducted (note--what??) as the 4-H reporter beating out Stephanie Phillips.  This was also the last year for Terry Ferris.

There was a lot of going steady. Lee and Stephanie. Jason and Nicki. Daniel and Felicia. Auburn had a lot of controversy over Bama 21-17. Not many people liked it alot. Lee Futch and Michael Creech entered the crazy, wild, never calmed class of '93. I exempted from my semester exam 7th period on the last day of school, so I didn't have to go. Tonya [Windham] threatened to kill me, and Jason [Smith] said "I hate you"

[let me clarify -- every six weeks, the highest average got a little poofy tiger award, and the fact that I won 3 out of the 6 that year, but Stan took home the year end trophy really bugged me.  Stan, I was robbed.]

Only 6 more years until "Seniors!" We had gone halfway and we think we can go the other half. I thin at sometime, everybody thinks about their senior year. Daniel [Stephenson] started listening to heavy metal, Clay and Monty will soon become a black belt, Greg, well he's my best friend so I could fill a whole page about him, Michael [Knowles] and Johnny [Knowles], well you know how they are! Come '93, I'm really gonna miss em.

But I can always look back in this book and find the wild times in 6th grade! This was also the year that people who didn't grow out of toys in 5th, they did in 6th. Thanks to Greg, Michael, Johnny, Daniel, Monty, Clay, Tonya, Stan, Jason, Allen Wise, Chris, Lee, Stephanie, Misty and Victor for making this one of the best year for a while to come. I wish I could write 100 more pages, but I don't have enough room. So I'll see you in the next yearbook to write about 7th!

Aaaand I'm back. So there ya go, 6th grade in a nutshell.  I guess next week we'll skip ahead to 8th grade.