I love major award shows, especially when it comes to movies... okay, well, I don't watch the Directors Guild or the Producers Guild or the People's Choice or the Independent Spirit or the Palme D'or or the BET Awards or the Soul Glo Awards or the Latin Grammy show or whatever else... but I DO watch The Golden Globes and The Academy Awards.

In years past, I would live blog, tossing up thoughts, jokes, tweets and so on every few minutes.  But since we've had Campbell Isaiah, "live blogging" has a been a little more difficult.  It's not that The Lovely Steph Leann is opposed to it--in fact, she rather enjoys reading it the next day, and even while I'm blogging, she's made many a joke that has ended up in the published post.

No, Campbell has bathtime in the middle of the evening, and then he goes down for bedtime.  While The Lovely Steph Leann does the bath and bedtime, I will prep the room for his bedtime, get his PJ's laid out, then get some of my things gathered for the next day and so on.  However, I'm usually finished before he is asleep, so when we watch a live program like the Golden Globes, she asks me to pause it, so we can pick back up where we left off when she comes back downstairs.

And in the age of social media, to keep pace, it's harder to push pause--because the winners are revealed, the moments are tweeted and posted on Facebook, the pictures are on Instagram and so on... it's easy to say "Oh, then just don't look at social media until its over!" but that's hard to do when you yourself are live tweeting.

So, no live blog this year, but instead, a few highlights of the show...


And finally... here are my favorite tweets from the night...

"It makes me sad that a cummerbund company hasn't sponsored Benedict Cumberbatch's tuxedo for award shows yet. #GoldenGlobes" -- @jonacuff

"The clothes that 80s movies predicted we'd be wearing 2015... only Prince was listening. #GoldenGlobes" -- @RemodelingClay, on Prince's big appearance

"Prince you are making doves cry with that outfit. #GoldenGlobes" -- @LauraLeighC, on Prince's crazy outfit

"The Golden Globes should be, 'We all get paid because of superhero movies. Good night. Drive safely, everyone.'" -- @pourmecoffee

"The #GoldenGlobes folks use the word 'courage' a lot.  Glad I saw the #60Mins piece on Iraq/Afghan war amputees first." -- @IngrahamAngle

"If Oprah cries when you speak you automatically go to Heaven." -- @samir

"All these men get to throw on a tux over their winter fat.  These poor women haven't eaten in 35 days.  Life is unfair. #GoldenGlobes" -- @JenHatmaker

"So everything is NOT awesome?" -- @daltonross, when "The LEGO Movie" lost Animated Feature.

"Do you think if I use the Loreal shade that is 100% Puerto Rican that I can look like J.Lo? #GoldenGlobes" -- @jamiesrabbits

"I just got to second base with J-Lo's dress. #GoldenGlobes" -- @jenhatmaker

"Apparently it's 'Bring your tatas to work" night at the #goldenglobes. #AllTheGlobes" -- @IAmAmyLatta

And my absolute favorite of the night...

@dawn_o_mite tweeted: "I often think Jessica Chastain has the career that Bryce Dallas Howard was expected to have 10 years ago."   That made me laugh long and heartily.

a message to the haters

"...No love for the haters, haters, mad cause I got floor seats at the Lakers, they see me on the 50 yard line with the Raiders..." -- Will Smith, "Gettin Jiggy Wit It"

The word "hater" is a funny thing. I guess the word has been around for a while, but only in the last few years as the concept of "hater" been around.  It's not necessarily someone who doesn't like what you are doing or where you are going, it's someone who doesn't like that if you are doing something great or headed in a great direction... thus, they are "hating on you", or are "haters". 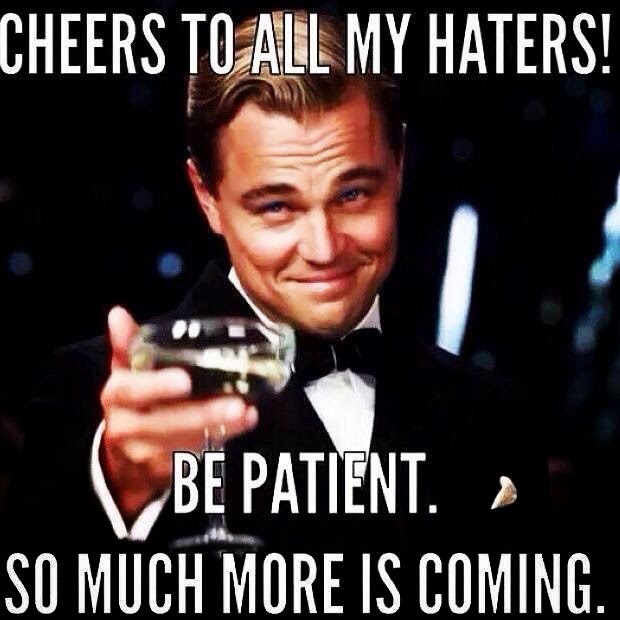 I don't care.  Not about you, anyway.

I used to.  I used to try and please everyone, and to some extent, I'll probably always do a little of that... but please you, the Hater, is something I don't have time for.

The things I do... the things I say... I strive for those things to be purposeful... to invest... to be kind and encouraging.  No, I don't always succeed... in fact, I fail much more than I want to admit.  But sometimes, many times, I do get it done, I do succeed, I do accomplish... sometimes I fly.

And you, Hater, are the one who wants to tug on those wings to keep me from flying.  To tell me I'm not good enough, or that I don't deserve success, or maybe that I'm just a jerkface.

I'm not trying to please you.  Not anymore.  Hate on me all you want.  And I'm guessing the more good things I do, the more people will join you.  Because I know you, Hater, I know that you hate because you can't get some things done yourself.  But see, that's not really my problem.  I'm too busy being awesome to worry about your shortcomings.  Too busy succeeding to worry about hating on you.

Much love to the Haters,