Just a quick one... sometimes things are funny, and need to be seen... 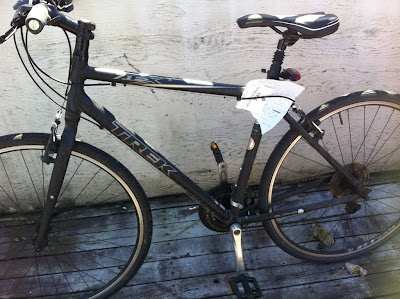 (in case you can't read the text, and/or the picture doesn't appear)

On Saturday April 20 I graduated From University and got straight white girl wasted.  After the bar it was too late to catch a bus , and I am too broke to afford A cab, so I borrowed your bike withoutasking.  It was a lusciously smooth ride from what I remember.

Anyways I am very sorry I did not ask to borrow your bike, and have so I have returned it with a coupOn for a free lava cake at Domino's as an apology. 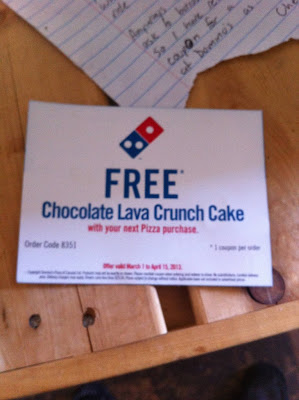 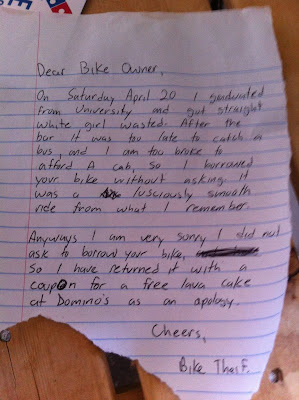 lifted from one of my favorite sites, Sports Illustrated's Hot Clicks
written by d$ at 1:01 PM No comments:

Email ThisBlogThis!Share to TwitterShare to FacebookShare to Pinterest
What's In It? randomness, uncomfortable conversations

Campbell Isaiah, or as the hip hop community in our house calls him, "Pocket Change" (word), turned 16 months today. He's a little behind on stuff... he's finally walking at a quicker pace, he's still not talking, and he still worships his bottle full of (homemade) formula.
One of our nighttime rituals is to give Campbell his final bottle before going to bed. We can lay him on one side of the bed, hold the bottle with the other, and he will turn over, get on his hands and knees, and heaven help you if you stop him from getting to that bottle. His face contorts, his crawling becomes rapid, he gives a squeak of excitement mixed with anxiety... he's chasing that bottle. Before he can get to it, he's already got both arms out, stretching as far as he can, to put his hands on that nectar of goat milk.
If you've ever seen The Blind Side, its like when Phil Fulmer sees the video of Michael Oher's manhandling of an opposing player... "I want him. I want him bad." If Campbell could talk, he would deadpan that about his bottle. "I want it. I want it bad."

Let me bring this around a bit.

I had the honor and pleasure of going to Passion's conference, "One Day" in May of 2000. This was about six months before I changed Stephanie's life forever by, you know, entering into her life. Ironically, The Passion Movement has had several "One Day" conferences since then, but this was the first. 50,000 college students and young adults on a hillside on a farm in Tennessee, all worshipping God, fellowshipping and trying to circumnavigate the overflowing porta-potties. Pee for JC, I always say.
It was incredible and wonderful... I've got the DVD, and watch it from time to time. Beth Moore, John Piper, Voddie Bocham, Louie Giglio all speaking, while Chris Tomlin, Matt Redman, and Christy Nockel leading worship. Doesn't get much better than that...

Anyway, one of my favorite modern worship songs is the re:imaginging of "The Wonderful Cross"... and after this past weekend's rememberance, its fitting. If you go on the YouTube, you can see a 13 minute clip of the worship during this song.


This is a big deal because during this song, a couple of students helped to bring a large wooden cross down from the hill, walk it through the crowd and place it close to the stage. Whether moved by the Spirit or felt obligation, people began to approach it, and kneel to pray at the foot of The Wonderful Cross.
At the 6:27 mark, something happens. A dude in green shorts and a white shirt enters from the right side of the screen, walks slowly, almost an amble, and kneels down at the foot of The Wonderful Cross. I like this guy. I can relate to this guy. A slow walk and a "yeah, this is good...", followed by a slow kneel and prayer. Please understand I'm not judging this guy at all--I'm pretty sure he just came to worship, I'm merely saying that I am like him... I get to The Wonderful Cross when I get to it, and I'll pray while I'm there. That's me.
Then... at the 645 mark, a dude comes up on the left side, plants his whole body on the ground, glances up, then face down prays. Which is cool, I guess.

But then... the one I love... from out of nowhere, at 7:12 in, from the left side, this guy in orange shorts and a white shirt comes flying from out of nowhere, hurling himself to the foot of The Wonderful Cross. I mean, this guy probably started slowly from way up the field, but gained speed and momentum, and was probably going full speed when he just threw himself to the ground. He just fliesthrough the air and lands a few feet from The Wonderful Cross.
I love this guy.  I want to be this guy. Its great to be the guy to walk in at my own pace, kneel and pray like normal. But to be the guy who cannot stand still, the guy who is running full speed towards the Cross--towards Jesus... running full speed because you want to get there as fast as possible, because every second you aren't there is a second not spent in His presence. I want to be the guy who loves Jesus so freakin' much that no matter what I do, it results in racing to Christ, in running to His side, to His arms, to the foot of The Wonderful Cross as fast as my legs will carry me. I want to be the guy who cannot stand to be away from Him.
I like being the guy who walks up and kneels. I want to be the guy at 7:12.
And when I cant run? When I can't even walk (without someone holding my hand), I hope to be like Campbell chasing his bottle... this look of determination, nay, desperation to get to what he so craves. Crawling, reaching before he can even get there just to get it a second faster.
Psalm 42:1 says "as the deer pants for steams of water, so my soul pants for you, O God. My soul thirsts for God, for the living God. Where can I go and meet with God?"