we wants the redhead

So, I'm a big Disney guy, but I'm not a PC guy. I think political correctness is ruining many things in the country because it's an overused term.

Having said that, I met the news that Disney is changing up the "redhead auction" scene in the Pirates of the Caribbean attraction at Disney World with mixed feelings. 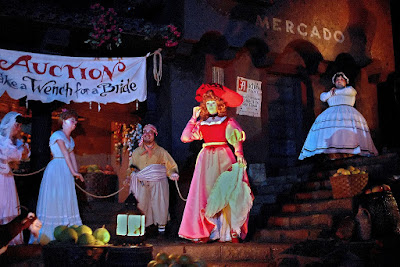 In case you aren't familiar with the famous ride, you board a boat, which takes you through a journey through dimly lit pirate scenes. Speaking mostly of the Disney World version (thought Disneyland is very similar), you pass by a mermaid skeleton, a skeleton steering a ghost ship, down a small pitch black incline, then in between a battle between a ship and a fort. The rest of the ride will take you through various comical scenes with pirates looting and drinking and plundering and so on, with World featuring Jack Sparrow, and Land being more traditional.

There is a scene in the second half that shows an auction for... well, women.  Audio animatronics of various sizes stand, waiting to be sold, as one of the pirates yells out "We wants the redhead!" referring to a more attractive... well, woman for sale.  Yes, it's a robot, but you feel me.

Some years ago, during a refurbishment, some scenes were changed to have some of the women weilding rolling pins chasing their men (as opposed to the other way around, as it was for decades before).  Disney now wants both men and women pirates/robots to be involved in looting and buying random things at the auction.

From what I've seen on social media, most people do not want this change, want Disney to leave well enough alone and are "tired of all this PC crap and tired of companies like Disney giving in to the small minority of people who want to change it!", or some such.

At first, I thought "Why not leave well enough alone?"  I mean, it's been like that for a long time, and Disney has monorails that need to be fixed, they have garbage cans that need to be emptied way more than before, pricing is going up, Universal is atop its game and so on -- I mean, Disney has bigger fish to fry, right?

There's something about selling a person that bugs me.  Even if it's a robot.

If Splash Mountain depicted the selling of a slave, or at least a black slave (as that's how we usually think of "slavery"), Magic Kingdom would burn to the ground.  Heck, they won't even release the movie "Song of the South" in the US for sale or streaming (I support it being available, by the way), and so why do we think the selling of females, even depicted as campy, silly characters, are okay?

Let me stop here.  I have a feeling by now, some of you reading are thinking,  "What are you talking about?  You're falling for the same PC crap that Disney is giving in to!" and those who really know me are probably saying "Really? What about you being against (fill in hot topic of the day that I've given my opinion on in recent months) but you support this??"  For that answer, I can definitively... I don't know.  I have no idea.

I do know this, though.  Slavery, at least in this country as we know it, doesn't exist. Trafficking does.  Trafficking is not okay.  Even when it's robots.

Gosh, I sound silly, don't I?  Robots don't traffic.  They do what they are programmed to do. And it's an old attraction back when making such amusing jokes and scenes were acceptable.  And honestly, I'm sure it's acceptable today... but I really am not bothered by Disney's move to change things up.

I guess I just pictured some 18 year old girl who'd spent 4 years being trapped in the slave trade (re: sex trafficking), but now free and enjoying a day of magic and fun at Magic Kingdom... and seeing a scene with silly, stupid, goofy looking robot pirates that ended up reminding her of how she was stolen from her family years ago, sold to some billionaire and sent to a foreign country... or a nearby county.

So that's it. Maybe I'm silly, and I don't plan on defending my position other than what I've stated. I have no problem with people being mad about Disney changing the scene... and if Disney makes an about face and decides to leave as is, I'll probably be fine with it.

But taking out the part where women are sold into slavery?  I'm okay with it.
written by d$ at 4:25 PM 1 comment: