At Starbucks Coffee, we start the day early.  Real early.  It often makes me think of the old Army slogan "We do more before 5am than most people do all day"... now, granted, we aren't saving any lives or protecting any freedoms, and as a matter of course, what we do is nothing compared to what anyone in the military does for us, but you get my point... we start mucho earlyo.

Opening at 530, we typically get there 30 minutes early... why?  It doesn't take that long to brew coffee... but we also have to brew tea... set up the tasty pastry case.. get the espresso machines primed and ready for your caffeine pleasure... get our registers set up... get the morning ready and so on.  And new baristas arrive in regular intervals all through the morning.

Of course, to get into the store, you need keys.  As a shift supervisor, I have those.

But wait, d$... I thought you were the assistant manager?

So that's Starbucks.  Its also important to note... I've very absent minded.  Very.  I'm like the Dory of the human world... maybe not as forgetful, but still, sometimes I will put something down and within 10 seconds, be looking  for it... or not remember what I just had in my hand.  Hopefully, this won't occur when I set Campbell down on the floor.

Sidebar... am I crazy in thinking that Dory and Marlin showed a spark at the end of Finding Nemo?  She essentially tells him that the only time anything makes sense is when he's around.  Call me old fashioned, but I'm not saying anything like that to anyone I'm not all about.  I mean, that's a pretty deep confession of affection, to say they are responsible for a safe feeling in your life.  Is it me?

Where was I? Oh yes, absent mindedness.  Starbucks.  Now comes the part of the show where two seemingly unrelated things magically combine to tell a quirky little anecdote.

One particular morning, say about, I dunno, 430am, I have my arms full of stuff.  My store keys, a can of Coke (because since Campbell came to be, I have found myself very tired in the morning, the evening, the afternoon and all times in between), my messenger bag, my apron and a bag of garbage.  All are going with me to work, save for the garbage... I toss my bag through the open passenger side window, place the can of Coke and my keys atop the car, leave my apron over my shoulder and then walk out of the garage a few steps to put the garbage in the can.

A few months ago, I was doing something similar, when I left the Coke atop my car.  As I was pulling out of my neighborhood, I heard a clink and smash, and realized what had happened.  In my rearview, I saw a can rolling across the road, and later would see the sticky splash of high fructose corn syrup and sweetness over the roof of, and along the back window of, my Kia Soul, affectionately named Red Robin.  Reeeeed Robin (yummmmm)

Determined not to let this happen again, I grab that can, take another early morning swig of cold caffeine and hop in Red Robin.  Off to work I go again.  Back out of the garage, take a left onto a main road, take a right out of our neighborhood, a quick left onto a busier road, and then right onto Highway 280.

About three or four red lights down, I get into a turn lane of a median, do a U-turn and back track about 100 yards to the entrance of our Starbucks.  I zip around the building, around the dumpster shed, and park behind the store.  Throw the car into park, turn it off, grab my bag and apron and as I start to get out, I put my hand on my pocket.  The familiar rattle in my pocket of my keys is... is not there.  I look around to the passenger seat, where I keep my keys many times... nothing.  Open my Mickey Messenger Bag (did you suspect anything else?) and flip around.  Nothing.

...did I remove the keys from on top of my car?

I was sitting in Red Robin, driver side door open.  My left leg out, foot on the pavement, my right leg in, foot on the floorboard.  Half in, half out.  My mind starts racing, and a horror begins to dawn on me, slowly but surely.

Those keys.... were on top... of my car... and I drove off. I drove off with the keys up there...  the image of the Coke can rolling across Herrington Street flashed through my mind, with the can now replaced with a set of keys on a lanyard, and the rolling action now becoming a flying motion as my car rounded a corner.

Or maybe they flew off at the intersection of Valleydale and 280.  I imagined myself parking at the nearby Chili's, then running around the intersection, desperately looking for the keys, avoiding traffic.  Then I imagined me using my little pen light on my car keys, looking up and down my neighborhood streets, amidst the faint glow of a street lamp, scanning the pavement for my store keys.  And hoping the people in the nearby homes don't call the law on me.

I'm sunk.  This is a going to be a disaster.  Now, I'll have to call someone else, another shift or manager with keys, and go retrieve them... which at minimum would take 30 minutes to go out and come back. 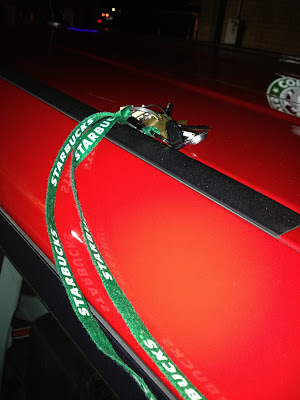 Those are my keys.  Sitting on top of the car.  In the same place I left them.   When I left them there... in the garage... they stayed there through my left, right, left and right turns, my U-turn, my right turn into the parking lot, and my parking.  They stayed there at speeds upwards of 60 miles per hour.  They remained on top of my car.

I grabbed my keys, the rest of my stuff, and my work day started as two other baristas arrived shortly thereafter.

I can only think that God decided he would take care of that little manner that day... there are some mundane things that happen in extraordinary ways... and I think that happens so the only choice you have is to credit God for it.  Because without His hand, there is no way those keys stayed atop the car for the short trip.

You gotta admit, it was a pretty cool trip...