I'm not sure that anyone but myself, The Lovely Steph Leann and our friend Cindy Jo is actually watching American Idol this season.  Heck, I stopped doing Idol blogs years ago, even before the dumpster fire that was the Mariah Carey/Nicki Minaj season...

SIDEBAR -- I'm proud to say I've been alive for the entire five or six years that Nicki Minaj has even been a thing, and I'm proud to say I haven't heard more than five seconds of any Minaj song.  I know she has one called "Starship" or "Spaceship" or something, but I only know it because the title appears on my screen on SiriusXM, but I'm quick to turn it.  To be fair, she does add a little flair to the Jessie J/Ariana Grande song "Bang Bang" which I want to publicly denounce, but deep down in the iPod of my heart, it sits next to "Party in the USA" as "My Jams"

OTHER SIDEBAR -- I don't know a lot about Jessie J, other than she sorta looks like a poor man's Idina Menzel.  And honestly, I'm trying not to like Ariana Grande because she's really flaky, but darn it if I actually kinda like her.  Let's move on. 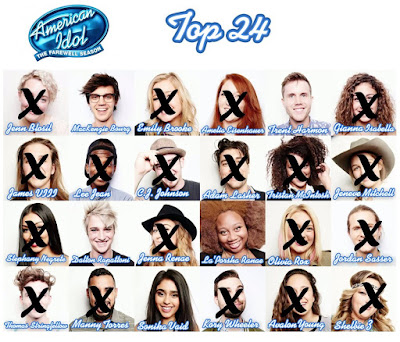 Anyway, we are rocketing towards the finale like a Meat Loaf album title (wait for it) and most unexpectedly.  The Lovely Steph Leann and I have had more than one conversation about how Idol has been a mainstay for Fox for a decade and a half, making it a bajillionty dollars, and yet, it's as if the execs at Fox said "Get it done and over as quick as possible."

So much so that we are chunking two at a time in the past few weeks, not even a separate results show, and seriously, I freakin' miss the Silver Stools of Doom that the Bottom Three had to sit on to await their fate!

I figured they would have at least a full Top Ten, even after that quick slashing of the Top 24... but nope. Knocking two out, then two more, then another, all under the guise of "Judge's Save", giving the power to Harry Connick Jr, Jennifer Lopez & keith urban to pick the best of the Bottom 3 to remain.

Anyway, tonight's show was the Final Six, soon to be a Final Five, as the judges use the "last Judge Save".  I didn't even know we were calling it that.

Who do we have?  Sonika Vaid, with her old school Demi Lovato teeth gap... Tristan McIntosh who, for the life of both myself and The Lovely Steph Leann, we cannot figure out how she made it this far... Mackenzie Bourg, who strikes me as very toothy... Dalton Rapattoni, the token eyeliner-wearing guy on the show... Trent Harmon, who is The Lovely Steph's Leann's favorite and seemingly a pretty cool guy... and La'Porsha, the big haired prohibitive favorite who can not just sing, but SAANG.

Here are my thoughts on tonight's episode...

First... Harry made some comment about how this is the final night to use the save, and said something about how everyone is bringing it tonight because they haven't used it yet... but actually, when he said it, the Judge's Save had been used about 10 minutes prior to save Sonika.  This show IS live, right?  Are they pulling a Seacrusty Fakery on us?

Second... Olivia Rox should still be here.  Avalon shouldn't have lasted this long, just like Tristan.

Third... If Idol were to continue, La'Porsha's version of Mary J. Blige's "No More Drama" would go down in A.I. folklore as one of those seminal moments on the show, a la "Summertime" by Fantasia or David Cook's version of "Hello" or Carrie Underwood's "Alone"... something you remember for years to come.

Fourth... While it's never a wrong time to have the performance of your season, like MacKenzie did tonight, it's not quite as magical when you blow everyone away with a tender version of Michael Jackson's "Billie Jean" only to have everyone be blowered awayer more when La'Porsha comes up.

Fifth... This is perhaps the first season that I could see anyone in the Top Four actually winning and being successful (which is a relative term for Idol, because though we have Kelly, Carrie, Daughtry and a few others, we also have DeWyze and Bowersox and many more forgotten names).  I say four because Sonika will likely be dropped next week.  It's time.

Sixth... Do you mean to tell me that Idol listened to the fans and American actually chose "Wild World" by Cat Stevens?  I'd almost guarantee that 88.4% of the Idol audience had no idea who sang "Wild World", and probably 67.9% of that group may not even know who Cat Stevens is.  I smell shenanigans.

Seventh... Its a joy to watch J-Lo, Harry and keith do their thing, because you can tell they truly are having a great time.  People complain that since Simon left, it's gone downhill, but I am one of those people who didn't watch for the disasters, I watched for the talents.  Don't get me wrong, I enjoyed William Hung and "Pants on the Ground" like anyone else, but I have really reveled in watching the real artists emerge (long live Julia DeMato!), and our three judges feel the same.

Eighth... While not in this episode, go out and find Kelly Clarkson's version of "Piece by Piece" from a few weeks ago, her new song.  Holy crap.  It might be the best performance Kelly has ever pulled off.

Ninth... Speaking of returning Idols, what is Adam Lambert doing that he can't take 2 hours and sit at the table and judge?  Or work with the Idols a little?  Seriously... Kelly Clarkson is like forever pregnant, but sat right down and did a great job helping the Idols, and THEN performed.  I give a pass to Carrie Underwood but Adam Lambert?  Sit yo' butt down and talk to these kids.

Tenth... I'll admit, I like Tristan, but I agree with Harry when he says that she's uber talented, but just not ready for this.  Which is annoying, because he was one of the three people that put her into this Top Ten limelight, but there it is.  She sang a Martina McBride song for the 2nd week in a row, and while last week's "Broken Wing" saved her bacon (she did it justice), this week she did a piano ballady version of "Independence Day".  That's not a song you can make into a ballad, or at least not easily.  And while she sang okay, the song lost its umph with her version.

Last point... Tristan and Sonika were in the Bottom Two, and had to sing to try and earn the Judge's Save.  While Tristan did the aforementioned "Independence Day", Sonika chose to sing, "Demi Lovato's 'Let It Go'"

This led to a deep chat between myself and The Lovely Steph  Leann, because I was somewhat bugged by the fact that it was "Demi's 'Let It Go'"  I immediately piped up with "That's Idina, not Demi.  What the heck?"