Make sure you check out part 1 of the books I read last year that didn't make my Top Ten... and then be sure to check for my Top Ten Books of 2019.
The numbers continue from the previous post -- again, not in the order I read them, but just to keep up with what I've listed. Also, again, bad at math and all that.

BE MORE ORGANIZED AND IMPROVE YA SELF

While I'm not necessarily into "self help" books, I do read some if I really like the concept and the author.  I'm a big fan of Ashley Eckstein, the voice of Ahsoka Tano in "Star Wars: the Clone Wars", and a legend around Star Wars circles, and while I did enjoy (21) It's Your Universe, I recognize I'm not the target audience.  But, even not being a chick, this book still is good for everyone.
It's her story of becoming a voice over artist, and eventually becoming the voice of Ahsoka Tano (though Rosario Dawson is playing her in The Mandalorian, and I'm excited about this, because I love Rosario Dawson hey boo).  It's a book about setting a goal and going after it, and I aligned with it nicely.

I'm also always looking for great books on the clean up process, because... well my house needs a good clean up. Hence reading Robin Zasio's (22) The Hoarder in You. Zasio is known for being one of the main people in the "Hoarders" series on A&E, and while nothing here is revolutionary, it's still a good reminder of how truly easy it is to get organized, it's just having a plan and doing it.

If you are kicking yourself for not accomplishing all that you wanted in 2019, or even 2020, though that's an entire other discussion, then... well, (23) In Conclusion, Don't Worry About It, the book by Lorelei Gilmore herself, Lauren Graham.  Lauren, a Gilmore, a Braverman, and eternal hotness, gave this speech to her high school in a commencement speech, and we got to enjoy it book form. It's worth the brief time it takes to read it.

It's always fun to be reading a book by an author who winds up sitting about five feet away from you as you read. Thus, the situation I found myself in in a Embassy Suites lobby as I was reading (24) Get Weird, while author CJ Casciotta sat nearby. He was there to speak at a conference, and I was there to listen, and it was all around a good time. It's a book about not fitting in, about using your creativity to the fullest, and about being weird and embracing that weirdness. I felt seen.

Lee Cockerell, a retired VP of the Walt Disney Company has a series of books, and this one spoke to me the most... (25) Time Management Magic was some magic I could really use.  Let's be real, nothing here is mind-blowing -- it's all basic concepts, but like Zasio's book about not being a hoarder, its advice we need to be reminded of frequently. Plus, it helps that he also has a background in the Happiest Company on Earth, which really spoke to me.
As a sidebar, he's pretty liberal in his politics and legit came after me in a thread where I wasn't addressing him nor responding to something he'd said. It was bizarre. 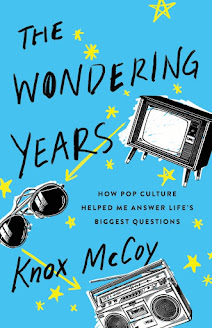 Finally, one of the most popular podcasts around, The Popcast, saw one of it's hosts write and publish a book in 2019. (26) The Wondering Years: How Pop Culture Helped Me Answer Life's Biggest Questions is by Knox McCoy, and is a solid book. Knox, a Christ Follower, weaves boy bands, reality television, current musical artists and more around a number of spiritual and Biblical quandaries with God and the Christian Walk.  Believers would likely enjoy this and Knox's take -- he's quite brilliant, actually. Barely missed my Top Ten.
-----------------------------------------------------------
TRUE CRIME
An author I always check on for new material is Kathryn Casey, who is based in Texas and seems to be covering every major murder and sensational court case in the state -- her book in 2019 was (23) In Plain Sight: The Kaufman County Prosecutor Murders, telling the tale of Kaufman County Assistant DA Mark Hasse, executed in broad daylight, the massacre that followed, and the couple who did it. I enjoy most of Casey's stuff, and while I haven't really like the style of the last few, this was somewhat of a rebound. Good, not great.
Bryan Burrough's (24) The Demon Next Door tells how he learned that a high school classmate of his, Danny Corwin, ended up becoming a serial killer. The book is just okay.
Amanda Lamb's (25) "Love Lies: A True Story of Marriage and Murder in the Suburbs" (true crime subtitles are long) tells of how Nancy Cooper's strangled body was found in a ditch in North Carolina, while her husband claims she went out for a jog and never came back. You might know where this is headed.
(26) "Twisted: The Story of Larry Nassar and the Woman Who Took Him Down", by Mary Pilon and Carla Correa, is the first of several books & films I consumed about the Nassar, the douchebag doctor for the US Gymnastics team, and how the women he sexually assaulted found the bravery to come forward. Takes you through the first few women to speak up, then the women who followed, and Nassar's world that crashes around him. Very informative and very detailed. This is where I toss in that trigger warning thing.
-------------------------------------------------------------
ENTERTAINMENT
Final three books on this "outside the Top 10" list all fall under the entertainment and pop culture category list.
(27) Best.Movie.Year.Ever: How 1999 Blew Up the Big Screen by Brian Raftery essentially just looks at a pivotal 12 month period in cinematic history -- some of the biggest movies and pop culture touchstones came out that year.  Fight Club, The Matrix, The Sixth Sense, American Pie, Star Wars Episode I: The Phantom Menace, Magnolia, and so many more are all discussed, with interviews and soundbytes from Sofia Coppola, Reese Witherspoon, Taye Diggs, Matthew Broderick, and loads more. Any movie fan would love this -- in fact, while I did my list and ranking in January of 2020, I'm not even sure why this isn't in my Top 10. But I'll go with what I have, though I may re-read this one soon. 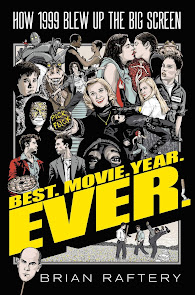 I read two books about the making of, and behind the scenes of, the show Friends. Both are excellent, but the one I liked 2nd best of the two is (28) I'll Be There For You: The One About Friends  by Kelsey Miller. Like the other (which you can guess will be in the Top 10), it's an indepth look at the creation, the casting, the premiere, and the seasons -- good, excellent, and mediocre -- that followed. If you are a Friends fan, you can't go wrong with I'll Be There For You, but I like the other just a little more.
And then, (29) Top of the Morning: Inside the Cutthroat World of Morning TV by Brian Stetler, is another who's subtitles give you the sense of the book. It concentrates mostly on the battle between The Today Show on NBC and ABC's perpetual 2nd place "Good Morning America", and how the latter slowly chipped away at the former's decades long dominance. The book was written in 2013, years before the (deserved) fall from grace of Matt Lauer, but you can see just in his actions and words that, knowing now what we know about his douchecanoery with his female coworkers, things were not well.  It does paint a rosy picture of how NBC treated Ann Curry, and I can believe it.
----------------------------------------------------------
AND THE KIDS BOOKS
Finally... books 30 to 33...
One of the joys of being a dude who works from home is that I am able to attend school functions with my kid -- including showing up and shopping with him at the yearly Book Fair (here's to hoping 2021 will bring this back to us. Who doesn't love a good book fair?  Back in my day, I'd show up with $15 in my pocket, I'd walk out with a Beverly Cleary book, the latest Bill Wallace novel, a Star Wars read-along, a poster of a Ferrari, a Trapper Keeper folder, and some pencil erasers shaped like West Indies Komodo Dragons.  Now?  $15 might get a two books from the pre-school section and a sheet of glitter stickers.
I said earlier that "Where is Walt Disney World" was the first book I've ever listed purchased at a Book Fair... I should have said "purchased FOR ME", as these were books I bought at my kid's book fair, that I read, and that I count on my list -- you'll see why in a second.
Goodnight Goodnight Construction Site by Sherri Rusker... Mighty Mighty Construction Site, also by Rusker... Going on a Bear Hunt by Helen Oxenbury... and Me & My Dad by Allison Ritchie.
All can be read in 3 minutes or less.  So why would I put these four kids books on the list?  No, not to pad my stats. I think I get credit for these books because I read all four, every night, out loud to Campbell at bed time, and I read them every night for around six or seven straight months -- and that ain't even hyperbole.  So these count.