when I get where I'm going

In February of 2012, The Lovely Steph Leann and I traveled with her family to Tullahoma, Tennessee, to celebrate in a 40th wedding anniversary reception for her Uncle Larry and Aunt Jo... they have been together since 1972--that's a long time by any measure.  I thought about this blog during the 3+ hours up there, and the 3+ hours back, and couldn't wait to get home and write my thoughts.

I wrote it out, and originally, this was going to be centered around what would have been my parents 37th wedding anniversary, which was January 25th... but it wasn't ready.  It just wasn't.  Or maybe it was, and I just wasn't ready to post it, who knows, but 18 months have passed, much has transpired, and this post lingered in the draft section of my blog feed... until now, when I think its time to let the interwebs have it for all eternity.

On Friday, September 6th, 2013 (tomorrow for me right now, today for many of you reading this), it will be two years since my Mom passed away.  Oh, don't worry, I'm not a shamble of tears, or all upset and stuff... I mean, yes, its a little sentimental, but I didn't want you guys to worry about making sure I'm not a quivering heap... but with Mom's 2 year anniversary looming, I thought it was time to send this one into the interwebs for all of time.

And as of August 31st, last Saturday, I lost my dad what this year will make 13 years... so that, then my Mom's passing makes for a couple of sentimental days over the course of a week.

Mom would have been 80 years old on her birthday this past year, February 6th, and 3 days after that, February 9th, Dad would have been 93 years old.  Mom never had much success in relationships prior to Dad, for a variety of reasons, and the same with Dad.  But they fell in love in an instant... its a love story that was hard to get going, and wasn't easy to keep going, but it worked somehow, and oh man did she love him.

﻿ Before her death, she would tell me that she would dream of Dad visiting her in the night.  He would come and sit on the end of her bed, pat her on the legs or the feet and tell her that he missed her, that he loved her, that things were going to be wonderful soon enough.

I won't turn this into a "I miss Mom" nor a "I miss Dad" post, and I'm not sitting here weepy and emotional... in fact, I'm hanging out with The Lovely Steph Leann and Campbell, watching "Pitch Perfect" (again, because she's obsessed with that movie).

Anyway, there is a song that is always on my mind, and no, its not Willie Nelson's "You Were Always On My Mind."  Its actually called "When I Get Where I'm Going".

To be honest, I wouldn't mind having this played at my own funeral... along with "The Story" by Brandi Carlile and "Somewhere Over the Rainbow" by Israel Kamakawiwo'ole.  I used the title, "When I Get Where I'm Going" as a title for a post once, one where I discuss moving to Birmingham back in the day, but never about the song itself... as a matter of fact, I just changed the title of that post, because this one is much more important.

Written by George Teren and Rivers Rutherford, the song was recorded by Brad Paisley, with background vocals from Dolly Parton.  It was released in October 2005, as the second single off of his album "Time Well Wasted", and became his 14th Top Ten hit, and his 5th #1... and was Dolly's 25th #1 single.

The video is was gets me, though.  As Brad simply strums his guitar and sings, various people hold up photos of those loved ones they have lost... some are unknown, others are a little more famous... Michael Reagan holds up a picture of his dad Ronald... Teresa Earnhardt is seen with a pic of her husband Dale... Pixar's John Lassiter is showing a picture of fellow artist Joe Ranft, who had died earlier that year in a car accident... and the last scene of the video is an old film clip of Brad Paisley's grandfather, sitting on the porch, laughing and welcoming us in.

When I get where I'm going, on the far side of the sky
The first thing that I'm gonna do is spread my wings and fly
I'm gonna land beside a lion and run my fingers through his mane
Or I might find out what it's like to ride a drop of rain


I'm gonna walk with my own Daddy and he'll match me step for step
And I'll tell him how I missed him, every minute since he left
Then I'll hug his neck

So much pain and so much darkness in this world we stumble through
All these questions I can't answer, so much work to do. 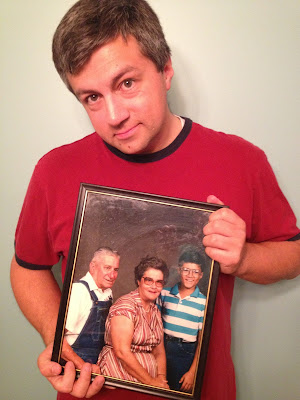 But when I get where I'm going, and I see my Maker's face
I'll stand forever in the light of His amazing Grace


And the beautiful thing is, I know exactly where I'm going.

Isaiah 53 tells us "He took the punishment, and that made us whole.  Through His bruises we get healed.  We're all like sheep who've wandered off and gotten lost.  We've all done our own thing, gone our own way.  And God piled all our sins, everything we've done wrong... on Him." (MSG) and Romans 8:1 says, "Therefore, there is now no condemnation for those who are in Christ Jesus because through Christ Jesus the law of the Spirit of life set me free from the law of sin and death."

When I get where I'm going... there'll be only happy tears.  Dad's known it for a dozen years, Mom cried those happy tears for just few years now.  Indeed.
written by d$ at 9:22 PM 1 comment:

Email ThisBlogThis!Share to TwitterShare to FacebookShare to Pinterest
What's In It? music

I was a band geek... in a way, I might still be, just without the saxophone.  I joined the band in 9th grade, wanting to play the saxophone.  I played auxiliary percussion my first year--triangle, viberslap, gong, maracas, so on--and then saxophone from my soph to senior year.

See, I was someone in school, or at least junior high (I don't know why they call it "middle school" instead of "junior high"... when and why did that change occur?  It's like "junior college" became "community college".  What's wrong with "junior"?  They don't call the lower grade football team "community varsity" or "middle varsity", its "junior varsity"... am I rambling again?)

Anyway, I was someone in junior high who had friends.  Lots of friends. People generally like me as a 14 year old.  But, I had few close friends... I didn't have a "circle to run with" or a group I always hung out with.

Maybe that's why I joined the band... it was an already established group of people of all sorts, all with one common goal--making music and moving around a football field in a rhythm.

So, at the risk of running this blog too long and rambling, I'll get to my little story... one night, the football team headed to play GW Long, in Georgiana, Alabama, about an hour away.  I enjoyed band bus rides, especially long ones, as it gave me a chance to hang in the back of the bus with some of the, at least who I considered, cooler kids.

I can't remember who won that night, and really, it doesn't matter.  What matters is that the band bus stopped at Hardees after the game for everyone to eat dinner.  Forty kids, myself including, from 7th grade to Seniors, piled off the bus and headed towards the counter of Hardees... I was in the midst of the crowd, and I peered around as the majorettes got their table, and the senior guard got their table, drum major included, and so on.

I paid for my food, turned around, tray in hand, and looked for somewhere to sit.  There were empty tables left, but all the tables that had people in them were full.  Glancing around, I spotted a larger table with eight chairs around it.  Seven were filled, one was empty.  As I took a step toward that table, with color guard and saxes and trumpets and more all sitting, eating, laughing, having the grandest time... as I took that step, ready to look at some of those kids and say "Can I sit here?", someone--don't know who--filled that spot.

Dejected, I stopped, looked around once more, and then walked over to an empty table and sat down.  The larger table was next to me, with the group still laughing, joking, being loud and being all the things I wanted at that very second.  With a frown and a sigh, I started to eat my food.  It was fine.  I was eating alone.  I mean, we all eat alone sometimes, right?

To my surprise, Shanna Nowling appeared out of nowhere.  Younger than me, she was more popular as a 7th grader than I was a freshman, so it caught me completely off guard.

She smiled and said, "Wanna... wanna come join us?"

We'll make room.  Three words that said "Sure, we are packed, but there is room for one more.  And that's you."

I got up, picked up my tray and followed Shanna Nowling to the table.  And sure enough, two people automatically moved aside so I could pull up a chair.  And yes, we were packed around that table, but I remember it being a hilarious time...

And now, 25 years later, I remember it. That one act of kindness that I'm sure Shanna, nor anyone else at that table, wouldn't remember (most people probably wouldn't remember who's table they were sitting at) has stayed with me all these years.

We'll make room.  We'll include you in our fun, so you aren't all by yourself, so you can be with us and join us and feel a part of us.  Isn't that what the Christian community is supposed to be about?

Its that kindness, the little things... and maybe if that has been with me all this time, its not such a little thing.  So just remember, the small things you do could be forgotten... or remembered.