Before you hit the top five, you can check out the rundown of other books read in 2018, and the first part of my Top Ten books of 2018... and this was going to be numbers 5 through number 1, but I ended up writing 700 words on this one book, my favorite fiction book of the year, and thought it deserved to be its own blogpost. 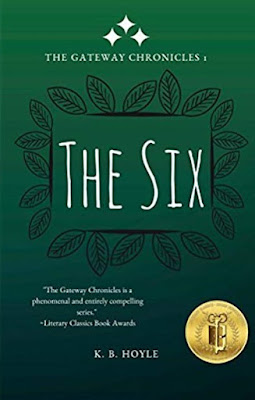 This one had been a long time coming... as I mentioned before, I don't really dig on YA Fantasy.  I am only 2 books into the Chronicles of Narnia, I've made a life decision that I'll likely never read any of the Lord of the Rings books (and from all accounts, the 2.5 hour, or 14 hour directors cut, of the movies serves the purpose) and while I really enjoyed the first two Hunger Games, the third was lacking. Heck, one Divergent book and I was ready to throw myself off of a bridge -- and don't even mention the Twilight crap.

So enter K.B. Hoyle with this book series called "The Gateway Chronicles", and the lead off book, "The Six".  I resisted this for a while... I own it on Kindle, and I started it once or twice, got a few pages in and put it down. Nothing to do with the writing, as it starts with normal kids at a normal summer camp, but more of me thinking "once this gets going and dives into Narnia Divergent Maze Runner territory, can I finish it?"  And I begged KB to put this on audio, asked for it for years.  Finally, probably for me -- yes, likely because she wanted me to read it, she commissioned the audio... thank you, KB, and to the fans who wanted audio, you are welcome, glad I could get it done for you.

So I started it, and lo and behold if I wasn't sucked right in. Darcy is your lead, a selfish 13 year old (I could have just said "13 year old") who attends a summer camp with a few kids that are friendly enough, but have a hard time accepting her... or she makes it hard for them to do so, including the chubby kid Samantha, who is the definition of a "good friend who does not give up on anyone". Darcy and Sam find a portal to another world, bring the others along and suddenly, we are in a world called Alitheia. And as you'd expect, she and her friends find themselves in a position to save Alitheia from sinister forces that wish to destroy it for bad purposes.

The book is descriptive, maybe to the point of over descriptive sometimes, but it paints a clear picture of the wonder and rich beauty of the new world; however, it's the character development that drives the story.  Darcy, Samantha, Amelia, Louis, Dean, and Perry are "The Six", and to me, its Samantha that's the linchpin of the group. When Darcy screws up and the others consider her an outcast, it's Sam that stands in the gap... the narrator, Dollcie Webb, does a great job overall, though at first, I found her interpretation of Sam annoying -- but then realized that's how KB intended for us to feel about Sam.  Annoyed, but amazed at her loyalty and friendship regardless. Without Sam, Darcy would end up alone in Alitheia and the story would stall.  We don't get enough of Louis and Dean, but I am guessing they'll have much bigger roles in the coming books.

The end of the book wrapped up a little too neatly for me, though (and this is sort of a spoiler but not really, but sort of) the book being told from Darcy's perspective, so as with Louis & Dean, it may be another case of  "a little bit now, with much more to come later".  If you read it, you'll know what I mean.

Caution on going to KB's website... as you read a brief overview of each book, including the next in the series, "The Oracle" (which I'm told will be on audio soon), when you get to Book 3's brief description of "The White Thread", there is a major spoiler from Book 2.  Proceed with caution.

Anyway, if you have tween and teen readers and up looking for something clean, compelling and not corny, but actually with a good story, try The Gateway Chronicles.

And KB has written a crap ton of books, including another series called "The Breeder Cycle", which I have no clue or concept about, but apparently steers more Young Adult Dystopian.

On a more personal level, I gotta give props to KB Hoyle, who has always been willing to engage in book conversation, writing chat every now and then, and successfully pulled off something that I can only assume is very hard:  World Building in a story. She truly is one of my writing heroes.