Here we go...  by the way, there are several videos on this post--if you reading this in Facebook, then click over to Clouds in My Coffee, so you can see everything properly.  Then come back to Facebook, search Clouds in My Coffee and become a fan!  We're 110 strong!  Let's be 113!  Yeah!

#100... Pixar Fulfills a Wish
Simply put, a little girl's dying wish was to see "Up".  Pixar heard the story, and they sent a representative to the little girl's house with a copy, before the movie was even released.  With her eyes unable to even open, her mom described for her what was happening--her mom, who had no idea the movie itself dealt with a death.  The rep left lots of Disney and Pixar swag, and after the movie, left with the copy.  The little girl died later that day.  And I love this story because Pixar didn't announce it, they didn't publicize it, they only did it because it was the right thing to do.  The mom told the story.  You can read the full story here... its sad... but its great that a company in today's day and age would be so kind.

#99... "Fireflies" by Owl City
I've heard its about a dream... I've heard that maybe its some sort of trippy drug reference... me?  I remember an area of Troy's golf course, an area that, when visited after dark at a certain time of the year, its just full of buzzy fireflies, too many to count.  My friends and I called it Firefly Junction.  Never slept out, there, though--the dew was too much.  Anyway, this song makes me smile, whatever its about.  MZ told me its her favorite song of the year... its not mine, but it does make the list.  Here's the sample (it will ask to open iTunes if you have it, otherwise you can hear it on the Apple page)

98... A Real Life High School Musical
Just like in the south, there are high school rivalries everywhere.  This one pitted Shorewood High against nearby Shorecrest High in a video contest up in Seattle--Mindy D'A!  Why didn't you tell me about this?!?!

The rules were simple... film a music video (lip sync, now termed a "Lip Dub"), one single take, one single shot, and involve everyone.  Shorecrest struck first, with a rendition of "Hey Ya".   You know, its pretty good... its kinda funny, with some guy in a Power Ranger costume, among other random things.  They seemed like they practiced quite a bit for it, and a bunch of high school chicks (Paging Wooderson, paging Mr. David Wooderson) shaking it like a Polaroid Picture.

Then Shorewood did theirs.  And in my mind, there is no contest.  After seeing "(500) Days of Summer", they elected to go with a video of "You Make My Dreams Come True" by Hall & Oates.   I don't know how long they practiced it, but according to the story on Obama-TV, "Shorewood responded by popping open a can of "Hall & Oates" whoop-a**".  (That's just a fun line, ain't it?)

They filmed it, then played and synced it BACKWARDS.  So the paper airplanes are flying backwards, everyone is jumping up onto their chairs backwards, people are walking forward, which means they are walking backwards in real life, the swimming team in speedos (!) is running backwards, people are singing BACKWARDS.  This is brilliant!  The lead guy spent tons of time learning the lines backwards and getting them lined up with the music.   The link to the first one is above, you can watch it, then watch the one below, and judge for yourself.

Oh, and challenge yourself... try NOT to smile and sing along.  Its quite difficult.

Come on Samson!  Can't you challenge Geneva, or Kinston or Zion Chapel in a Lib Dub Throwdown?  Let's do it, Tigers!

And, just as I'd like to find ways to use the phrase "Read the rules, shankapotamus", I also would like to find a way to somehow "Pop open a can of 'Hall & Oates' whoop-a**" in real life.  Ah, dreams.

97... "The Hammer"
As I watched about 50 movies this year, they are abundant on this list.  And this is the first of 25 on the list, not counting actors or performances.

This was written and produced by Adam Carolla--you might remember him from "The Man Show", a show that I never really watched (any show that featured women called "Juggies" probably wasn't a show that I really should have made appointment TV), but that doesn't take away from the fact Adam is hilarious.  His podcast ranks high on this list, and I had heard about his movie, so I got it on Netflix.

Its really a simple story of a Jerry, a carpenter who was a former boxer, and was brought back into the ring to train and try and make the upcoming Olympic boxing team.  He's going up against several much younger prospects, including Robert, a rising boxing star.  He's also up against the manager, who sees Jerry as nothing more than a sparring and training partner for Robert, who he really wants in the Olympics.  There's also a small love story plot, featuring Heather Juergensen as Lindsay, though that side story is small, remains cute and doesn't distract from the overall Olympic boxing theme.

I really liked this movie... as Carolla has ranted about on his own podcast, the movie is Rated R, but for no good reason.  It's listed as "violence", but its a BOXING movie.  I think there might be one single F-bomb, maybe two, but I don't remember... other than that, its probably a movie that I'd watch with Campbell Isaiah if it came out, without much worry about bad things happening onscreen.

Just in a sidenote, Carolla is opposite Juergensen, and in one scene, they kiss, just like many movies feature.  Well, Carolla is good friends with fellow writer Kevin Hench, who is married to Juergensen.  This would like me writing a movie with my buddy Mikey, then starring and (stage)kissing his wife Ashley.  That would be weird.  I mean, good for her and all, but weird, nonetheless.

96... Steak Tartare at the Stadium
Love this commercial, mostly because of the last three seconds, which always make me laugh

This is a movie that really, only Clint Eastwood could star in. Clint plays Walt, a gruff, tough widower who has been living in his house forever, and isn't too happy to see the Hmong Asian family move in next door. He warms up slowly, mostly due to the persistence of Sue, the teenage girl, and her brother Thao.


The family sees trouble when a local Hmong gang pressures Thao to join them, going to the point of assault and threats. Walt gets involved, against his better judgement, and a whole lot of bad things happen before the final scene of the movie, including one that made me sigh, and thank heavens that The Lovely Steph Leann didn't see what I just saw.

Excellent film, but full of language and violence.

Anyone who knows me knows I have a deep affection for New York City, so I really enjoyed this tune--its fairly clean, except for the language that Jay-Z usually puts in his music, and it gives nods to everything from the Knicks to the McDonalds to Tribeca to "long live the World Trade".

You can click here to sample it (if you have iTunes, it will ask to open it, if you don't, you can hear it on the page)

Going to a new place to work is never easy, and having traveled the Starbucks roads for almost seven years, I've had to do it many times.  When you go to a store that is... well, not reallyclickish, but kinda that way when you get there, its even harder to break through. 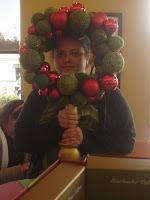 And then I got to know Tracy, who is a shift at night.  We're about the same age, with much of the same life, and work, experience.  In Starbucks, you don't find a ton of baristas over 30, so when you do, you connect with them in a way that its hard to connect with a 19 year old.  When you say "A-Team" and they say "What is that?", you know that a connection hasn't been made.

Anyway, without writing a memorium, Tracy has been great to work with this year, and I take my hat off to her for making my transition earlier this year much easier than it could have been.

92... "Blue Harvest"
Yes, yes, it took me this long to see Blue Harvest.  But it was awesome when I did.  You have to be a Family Guy fan to appreciate it, and really, it helps to be a Star Wars fan as well, but I finally downloaded it, and its absolutely hysterical...

91... The Slapchop Rap
Who doesn't want them a slapchop after watching this video?  I'll be honest with ya... you do a Broadway song to sell a Snuggie, and The Lovely Steph Leann is at Target in five minutes trying to find one.

Vince Offer, the guy in the video, is a pitchman, just like the LATE GREAT BILLY MAYS (written in all caps as a yelling honor to Mr. Mays), and has done the Slap Chop infomercial.  There's some controversy surrounding hm, as BILLY MAYS claims that the Slap Chop came after the Quick Chop, which BILLY MAYS advertised, but Vince Offer stole the marketing and the infomercial demo ideas.  Who knew there were Info-Wars?

Born as Offer Shlomi in Israel, he's got a track record of bad lawsuits and terrible police run-ins, including one where he slap chopped a prostitute and was charged with assault.

DJ Steve Porter made a music video remix of the original Slap Chop infomercial, dubbing it "Rap Chop".  After posting it to YouTube on April 25, 2009, it quickly spread over the internet. As of September 4, 2009, it has been viewed over 5 million times through its original upload, and millions more as it was posted across other sites. It reached #13 as the all time Top Rated and #3 all time Top Rated in Comedy on YouTube.

In July 2009, in an apparent deal between Porter and Shlomi, the "Rap Chop" was made into a real infomercial that began airing nationwide. Porter's original remix included footage from the movie "House Party" and TV show "The Fresh Prince of Bel Air"... however, for the national infomercial, this footage was replaced with that of a woman break dancing and another dancer dressed in a pink bunny rabbit costume.


So there you are... you know now the story of the beauty behind the Rap Chop, making it the 91st coolest thing of 2009.

Coming up... American Express is all smiles... The battle of the mall cop movies has a clear winner... and Miley Cyrus actually have two--TWO--appearances on this list?  What?  What!?